American prospects to displace coal and petroleum fuels have been boosted by natural gas from hydraulic fracturing. This “fracking boom” began when “slickwater “ fracturing made extracting gas from shale feasible in 1999. By 2005 thousands of fracking operations provoked vehement protests. Wikipedia’s page on hydraulic fracturing plus its talk page evidence fragmented and contentious knowledge of hydraulic fracturing. Blogfests of conflicting ignorance are much worse. Too much “belief;” too few facts.

What’s at stake? Hydraulic fracturing is estimated to nearly double workable natural gas reserves globally, not just in the United States. However, output from a fracked well is lower, so many more wells are needed; maybe 10 times as many or more for the same output, and the basins to be exploited cover much more geography. The energy and especially the water required per BTU obtained also rises dramatically, so the return on energy is lower. Hydraulic fracturing can directly affect much more land area and many more people. Unless operations are carefully conducted, environmental risks are significant in addition to the risks of handling volumes of flammable fuels. Despite this, most people cognizant of our energy crunch see fracked gas as a stage toward weaning off fossil fuels without severe economic disruption. It buys time. 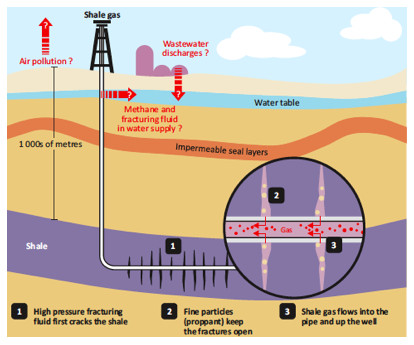 One of the best sources of factual information on hydraulic fracturing in plain English is the IEA’s “Golden Rules” report. The above diagram from that report shows the essence of the technology and its environmental risks. One of those risks is excess methane and other volatiles released to the air unless wells are capped from the outset. Doing this increases the energy yield too.

However, water pollution is more likely to rile people. Most incidents so far involve ground water contamination. Since chemicals in aquifers or wells could come from other sources, proving that they came from a fracking operation drags for years without being conclusive, as happened in early cases in Colorado. One suggestion is to put tracer elements in the slickwater to identify a fracking operation that has infected an aquifer.

Careful management of the drilling fluids (slickwater) at every stage of preparation, use, and disposal is essential to preclude contaminating water. Slickwater contains some nasty chemicals. The fracking industry has recently posted industry descriptions of the process and lists of chemicals used in slickwater. The Groundwater Protection Council has teamed with the oil and gas industry to create a fracfocus site from which you can learn of fracking wells near you and, hopefully, what chemicals they use.

About 25% of the slickwater comes back up a well. Mishandling disposal of it is “thought” to be the major source of contamination so far. To await disposal, it is either captured in tanks or in a pond that is supposed to be ground sealed to prevent migration into soil. Some is trucked to sewage plants that agree to remediate it. Whether they really can is open to debate. Sometimes backwater is pumped down deep injection wells, subject to the same sealing issues as a fracking well. Disposal is the big issue.

Legislation has conferred more lenient standards for classifying hazardous materials on oil and gas operations than apply to everyone else. Most industry is regulated to a Class 1 standard: one must establish that leakage into aquifers is a near-zero possibility before injecting hazardous waste underground. But oil and gas hazardous wastes that may have the same contaminants are labeled Class 2, which are held to less rigorous standards.

Public knowledge about hydraulic fracturing is mostly from investigative reporters digging into suspicions about secretive processes. ProPublica has an aggressive series and Gasland is a critical video. Tickerspy lists only 25 publicly traded players among hundreds in this game. Critics think that too many of them “cowboy it” or cut corners – attitudes that led to the Deepwater Horizon blowout in the Gulf of Mexico.

No operation is totally failsafe. “Best judgment” may be pretty good, but not 100%. The intent of fracking is to expand crevices to release gas, disturbing the geology, and it may not be shaped exactly as modeled anyway. Cement casings on boreholes must be carefully poured to avoid cracking. Barriers between a fracking well or an injection well a mile below an aquifer are not absolutely guaranteed to hold forever. Contention between industry and critics goes on and on.

Right now the gas industry is complaining that low prices are forcing them to take losses. But if we go on to extract a lot more gas throughout the United States, the working issues in fracking operations will affect a lot more people and their water supplies.

Our approach to dealing with such problems has been to balance the viewpoints of contending interests. This is obviously not working very well. If anyone has an interest in forming a Compression Learning group to look at the issues in more depth, and as part of a total regional water system, let us know. We’ll help you get started.