The Retreat of Western Liberalism by Edward Luce. 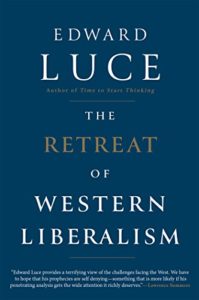 Edward Luce is British, and currently the bureau chief for the Financial Times in Washington, DC, but his reporting is primarily political. Prior assignments around the world give Luce an international perspective, so the book threads through global politics. Its title captures its theme: The West and its values are becoming less attractive to the rest of the world. Western democracy is not the destiny of the 21st century.

Much of the rest of the world has sensed this decline for some time, and more clearly than Americans. “History is not a self-driving car moving toward a pre-set destination,” which is how Americans think of it; Manifest Destiny and all that, you know. Perhaps the entire Industrial Revolution is just a blip in a much longer reach of history, recognizing that at the time Columbus sailed, China and India must have accounted for well over half of all global production.

After Columbus, European maritime and industrial superiority let the West suborn the East for a few hundred years. Chinese and Indians still smart from Western humiliations during the 19th century. The West has forgotten this; they haven’t. In the 21st century the center of the world’s political and economic gravity has been shifting toward the Orient. It will probably keep shifting, and global values will shift with it.

Today’s democracies are floundering. In the U.S., governments gridlock in intractable values clashes. In the UK , Brexit is forcing examination of the bureaucratic tangle that is the European Union. And in Russia, Putin rides a managed democracy, a reality show veneer coating a confusing, chaotic kleptocracy. Is this the future that the West wants the world to emulate?

From disaffected U.S. Trump voters to the rebellious youth of the Middle East, down-and-outers everywhere are rejecting “globalized democracy.” Maybe, just maybe, more democracy is not the answer. Maybe democracy is stable only in expansionary circumstances, deciding how to divvy up more stuff, and doling out more rights and privileges. When faced with danger and contraction, commoners have historically preferred a strong leader to make messy decisions for them. Reality in democracies is that elites, not the great unwashed, have always run the show. Elites feared control by ignorant masses so much that the U.S. Constitution was designed to limit it.

The Retreat of Western Civilization is up to date, and readable in both style and length. Luce delves into the chaos that is the Trump administration. Like Hillary Clinton, Luce poses a laundry list of policy directions, but he is not optimistic. Trump is unlikely to budge Hillary’s voter-rejected Washington Consensus, rendered lifeless by liberal, technocratic blind spots. While barely touching on the possibilities for financial or environmental collapse, at the end he punts: We’re on the cusp of radical change, in the extreme uncertainly that precedes it. Scenarios of global devastation are easy to predict. Optimistic scenarios portending a new age of “freedom,” whatever that is, are foggy.

The End of Theory: Financial Crises, the Failure of Economics, and the Sweep of Human Interaction by Richard Bookstaber 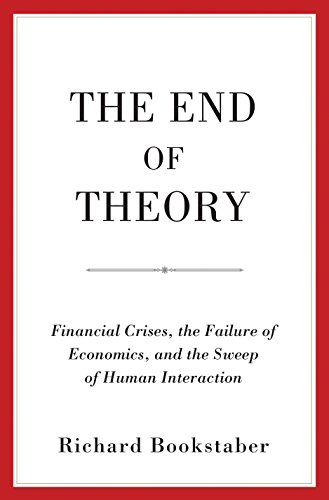 Bookstaber is a Wall Street veteran who was in the trenches during several major pops of financial market bubbles. He has been everything from a trader to a risk manager, to an expert testifying on financial crashes before Congress.

If you are interested in details of how the collapse of 2007-2008 went down, toward the end of the book you will find as clear an account as I have seen, complete with diagrams. But Bookstaber contends that the linkages between banks, hedge funds, trading desks, derivatives desks, and the like form a very complex system. Each of these players is an independent agent moment by moment doing what they think is best. They are not all-seeing, and possibly not rational. What might trigger a cascade of events is impossible to predict, and certainly not with the assumptions built into conventional economic models.

Economic theories based on static equilibrium models fall on their face. They greatly simplify the actual market. Worse, they do not factor in human behavior of the various parties. Bookstaber takes readers through his journey discovering that “linear” projections using classical economics had no chance of predicting any major market crash.

Instead, Bookstaber became a devotee of chaos theory and independent agent models – simulations – in which various behavioral assumptions can be tested. No model is perfect, of course, but independent agent models can at least consider reactions under conditions of extreme uncertainty. It’s somewhat like running flight simulations of aircraft in perilous situations and seeing how pilots will react.

In addition, we should not rely on projecting the future as an extension of the past. The future will not follow a historical trajectory. It will curve and twist, constantly change, and sometimes do something very unexpected. Financial markets today are computerized trading algorithms all trying to get an edge on each other. We have set up a complex system changing so fast that mere mortals can’t keep up with it.

In the financial world, Bookstaber concludes that we need “road-in-the-headlights” models that can adapt to changes quickly, and we need to use them differently. During a crisis event, the players need to drive this model. Decision makers pose a narrative of how a crisis may unfold; then question the model’s response for plausibility. We cannot anticipate every possibility. Doing that generates “he knows that I know that he knows” loops to absurd limits. But if we thereby recognize the limits of our knowledge under duress, we can use the output of such a model to make more informed guesses.

Bookstaber limits his prescription to the financial world, pretty much as-is. He does not try to prescribe a financial system for a future world with a different values system. In a major crisis of war, famine, or environmental disaster, the financial system might be just one more casualty of everything else blowing up at the same time. Very little that looks like the past will be a useful guide if many of our old assumptions are no longer valid. Buckle your seat belts. Maybe we can adapt through it.