Development Betrayed: The End of Progress and a Co-Evolutionary Revisioning of the Future, by Richard Norgaard 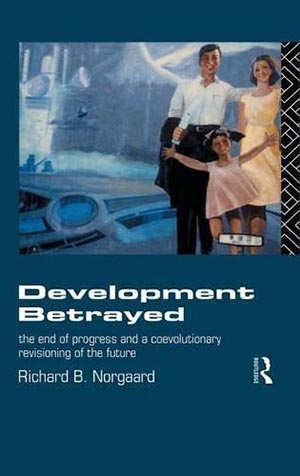 This book was recommended by Craig Lindell, who is frequently on our teleconference calls. It turned out to be as good as Craig described.

Richard Norgaard today is a biologist and climatologist on the Berkeley faculty, and a contributor to the IPCC climate change models. However, he wrote this in 1994, a pioneering book ahead of its time. Although not highly technical, the book was intended to be seminal, too philosophical to be a best seller. Its phrasing could probably be more clear today, but it reads well and stands the test of time. If you are curious about how society got in this mess, you will like the book.

Norgaard carefully researched the history of human thought. His work captures the difficulty of dealing with a world in Compression, that we humans are our own major enemy. We get in our own way. We can’t get our act together. For a seminal book, it is readable. For those wanting to test how he arrived at conclusions, an afterward has several pages on each chapter explaining how conclusions were derived from sources.

Norgaard probes the biases that accompanied the development of Western scientific and cultural thought. One is Cartesian Dualism: properties of a mind are separate from the physical properties of a brain or anything else. Therefore science can logically construct a “theory of everything” because, once discovered, everything is explainable by a clear chain of cause-and-effect, also called a Newtonian or mechanical view of the world.

This thinking splintered science and industrial society into deep specialties that are now hard pressed to be aware of each other, much less communicate. Newtonian linearity of thought has deluded moderns that everything is somehow destined to progress, that we must inevitably become both smarter and richer, and to do it, must dominate nature.

Norgaard points out that nature has no regard for progress. It just is. It evolves. Therefore we should evolve with it. He introduces the concept of co-evolution, humans and technology co-evolving with nature. Any ultimate state to which humans aspire they will discover to be a mirage evaporating before contact. Nothing is fixed and firm, not even rock. All are always adapting to everything else, some rapidly; some very slowly.

Up to now, linear thinking has greatly benefitted us in terms of scientific knowledge, creature comfort, economic growth, and adventurous mobility. However, the ecological trauma from this advance is intense and getting worse. To revive ecological health, we should stop “thinking straight,” and think much more holistically. The contrast between prevailing linear premises and holistic premises are encapsulated in a table on his page 62. 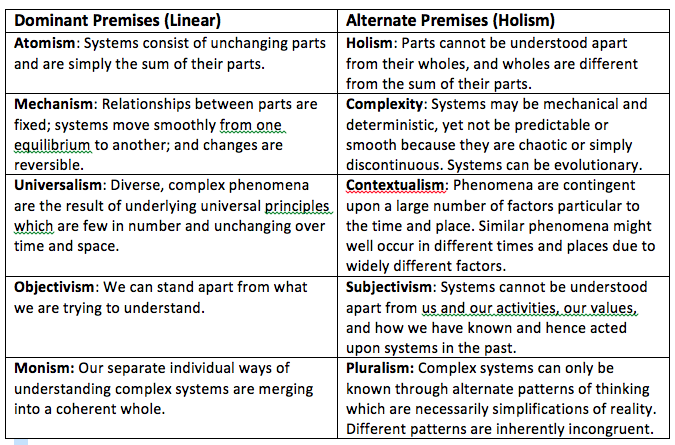 All the way through, these premises bolster Norgaard’s arguments against the deeply ingrained concept of inevitable progress. He finishes by advocating ending hopeless quests for a few universal truths; instead accepting that we have a role in the unfolding of reality. His cosmology is co-evolutionary, the human side of which is that deeply knowing anything is communal, a shared social process, not the false glory of power and material accumulation, nor even vote counting and legal enforcement. He re-frames progress as nourishing “diverse wonders and universal dignity of being, becoming, and sharing.”

Mechanical thinkers will consider such a goal to be sentimental rather than definite and doable. Paradoxically, such a reaction helps reinforce Norgaard’s conclusions.

Norgaard thinks beyond the clashes in thinking that characterized the 20th century, and that still drive our economies and embroil our politics. A passage from p. 153 captures the flavor:

“Progress, heretofore, has been in the hands of experts at best, market forces at worst, and only recently, though distorted by false expectations, in the hands of the public. Progressive institutions disempower the vast majority of individuals and, as designed and operating under modern premises of Western science, simply cannot address complex problems effectively. Markets, on the other hand, empower people to reach the goals they can reach as individuals, but disempower individuals in their efforts to reach goals which require collective action. Both markets and progressive institutions disempower communities. Given the increasingly obvious vacuity of the modern vision of progress, it is difficult to understand why the general sense of malaise at the end of the twentieth century is not even more serious than it is.”

Twenty-three years later, the general malaise does not seem to have lifted. If anything, it’s worse. “The system” is lost in its own fog. The doctrines of the past will not lift it. We need to evolve into something very different at a record pace.
–

Terror, Love and Brainwashing: Attachment in Cults and Totalitarian Systems, by Alexandra Stein 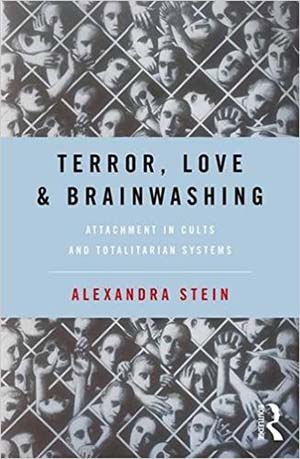 Alexandra Stein is a cult survivor. In her youth, she was a member of a “left-wing” political cult. Now her “obsession” is researching cults, and how to de-program people from them.

Alexandra likes the word “totalist” to describe cults. Almost any belief system can become a cult if it heads down the path of totally consuming the lives of unquestioning followers. Some cults are religious. Some are political. Some are economic (the insiders at Enron come to mind). Some may be tribal. And some may be environmental.

Very smart people may be captivated by cults. Attraction is more psychological than intellectual. Most cults are small, a few to a few hundred people. But some engulf large movements and whole nations, like Hitler’s Germany, Mao’s China, and Kim Jong Un’s North Korea.

So how do you distinguish a cult from a movement that may be passionate and in a social minority? Stein identifies five key characteristics:

Inevitably, the inner circle takes on an aura of impenetrable mystery. To get in, you must be invited. Hush-hush deliberations are cloaked in excuses why only a few can be entrusted. Leaders concoct plausible conspiracy theories – or plans to defraud. Everyone becomes a secret agent within a hierarchy of trust. If you have never been in a cult, you can imagine members enjoying a great sense of comradeship. Stein says no. Even the leaders feel lonely and isolated. Who do they really trust?

Stein delves into larger cult movements, but does not mention Carl Jung, the famed psychologist who at the time of WWII was considered an expert on Hitler’s mental state. Eight decades ago Jung warned that mankind’s biggest danger is psychic epidemics. In his words,

“The gigantic catastrophes that threaten us today are not elemental happenings of a physical or biological order, but psychic events. To a quite terrifying degree we are threatened by wars and revolutions which are nothing other than psychic epidemics. At any moment several millions of human beings may be smitten with a new madness, and then we shall have another world war or devastating revolution. Instead of being at the mercy of wild beasts, earthquakes, landslides, and inundations, modern man is battered by the elemental forces of his own psyche. This is the World Power that vastly exceeds all other powers on earth.”