Should Humans Adopt a Mushroom Strategy?

The Mushroom at the End of the World: On the Possibility of Life in Capitalist Ruins, by Anna L. Tsing 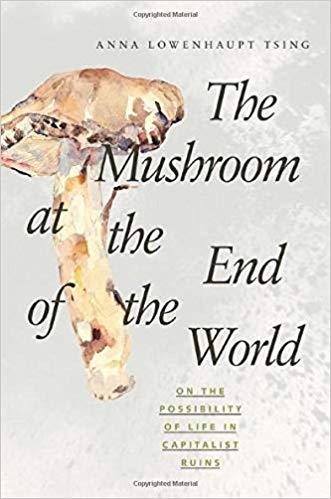 In some ways, mushrooms are smarter than people. We should pay more attention. Although not quite said, that’s the conclusion of Anna Tsing, Professor of Anthropology at the University of California, Santa Cruz. This book concentrates on mushrooms, the matsutake in particular, but Tsing weaves into her story detail about much more than dry facts about fungal biology, although those are fascinating. She recounts her personal experiences with the matsutake and the people that pick and process them, writing from first-hand episodes both within this mini-industry and with the scientists who study mushrooms.

Tsing invested personal time with mushrooms and mushroom people, but as an anthropologist, she ties it to a bigger theme: How are we going to live in landscapes devastated by industrial ruin? We can’t fix what we have broken on our own. We have to learn how to live with the forces of natural regeneration — or revitalization. That implies huge increases in what we understand, and changes in how we think – our values. Tsing dances around that in a later book she edited, Arts of Living on a Damaged Planet. But first the mushroom story.

Few of us learn about mushrooms much beyond their spot in a salad bar, but a little digging aids our understanding of nature. Neither plants nor animals, various mushrooms are well-known cover crops for remediation of contaminated soil. Fungi are speculated to be the first form of life on earth. They digest externally; then absorb the nutrient, so they can attach to rock and break it down. Maybe eons ago great globs of fungi rose on the earth. Now, where fungi prepare the way, lichens begin to grow on rock. After lichens come other vegetation, including trees that appear to be growing out of rock. Give it time and life thus creates its own soil. Six percent of all earth’s land area is still covered by lichens.

Consequently, mushrooms are nature’s clean up squad, found wherever nature and soil have been disrupted – by mankind or by nature’s own forces. Mankind has now disrupted so much nature that we should be thankful for mushrooms. We increasingly live in constantly disrupted landscapes. If surrounded by artificial environments, we are scarce aware of the disruption.

Fungi adapt very quickly because their reproduction system interplays within a mosaic of genes. They do not have animal style sex. They can, in effect, re-sort their genes by joining their own body cells, or by jointly forming a new type mushroom with a different type of mushroom nearby. They do emanate spores, but how they work has been described as mushrooms being less inclined to migrate to more favorable landscapes, than to adapt to whatever landscape overtakes them. All live symbiotically with hosts, so they adapt to new hosts in a changing landscape. That is, landscape disruption puts fungal adaptation into overdrive.

Fungi are essential to their hosts. Underground networks of micro-fungi provide messenger and transportation services to their hosts. Plant scientists call these mycorrhizal networks, conveying not only signals, but carbon, water, phosphorus, nitrogen, and other chemicals plant-to-plant. The slang name for this is the Wood Wide Web, but little noticed, even by growers. Out-of-sight; out-of-mind. Mushrooms steal media attention only if one is humongus, like the four-square mile specimen under the Oregon forest, eating trees.

Tsing spends much of the book on human customs in the mini-industry supplying the matsutake mushroom. Matsutake is a traditional delicacy in Japan, so there is a market for them, but one too small to attract regulatory attention. Matsutake are an acquired taste, acquired by few non-Japanese. Older Japanese that grew up rural are nostalgic for it, remembering their grandparents serving matsutake back when the forests were still scarred by heavy logging during the late 19th century. As the re-growing forest matured, the matsutake yields diminished.

There are three major foraging areas for matsutake: Oregon, China, and Japan. Since Japan is not self-sufficient in matsutake, pickers in places like the Oregon Cascade Range (long disrupted by logging) and Yunnan, China evolved “supply chains” to Japan. The Japanese matsutake foraging area is around Kyoto in forests ravaged by logging during the Meiji Restoration.

The connections of the pickers in each of these places with the matsutake mushroom differ, of course. The most intense is in Japan, where the Matsutake Crusaders disturb the forest afresh to stimulate conditions for pine, the first tree to grow when forest soil has been reduced almost to its basic elements.  Matsutake love pine that is around 30 years old, so the Crusaders work private patches where they can disrupt growth to favor pine. In Oregon, matsutake entwine in 40-year old lodgepole trees that sprouted after Douglas fir was logged out. Matsutake is a “mid-successional” fungus, meaning that it thrives about half-way through a forest regrowth.

No one farms matsutake in any conventional sense. Elusive, it confounds carefully calculated priming. You hunt for it, espying conditions that favor it. These are not the same in the three foraging areas, but differ depending on the landscape. In Oregon, “bumps” on the ground clue hunters that matsutake might lurk beneath, but bumps defy verbal description. Hunting skill is honed by experience. The smell of matsutake varies depending on its hosts in that landscape. Forest ecologies are local, unplanned networks of whatever species happen to like the place, impossible to exactly reproduce. To top this off, matsutake grow in unexplained surges, profuse amounts one season, meager pickings the next, with no discernable reason why. Matsutake refuse to conform to our models or expectations.

Tsing recounts many firsthand stories about Matsutake hunters, traders, and scientists. If there is a theme to these stories, it is that Matsutake hunting attracts people who like being “free” in the forest. They minimally heed forest service directives or advice. Hunters in Oregon are a mix of Asian immigrants and white venturers. Matsutake hunting reminds Southeast Asians of long-ago tribal activity in their mountain homelands, and many whites are military veterans escaping their frustrations with American civilian living. A new hunter may tag along with an experienced one to learn the ropes by doing. Eventually most follow their own favorite trails using their own techniques.

Markets are untamed too, with wild swings in price, sometimes in the same evening of trading. Skill trading is as vital as skill hunting. In Oregon and Yunnan, buyers scarf up the offerings of the pickers, and have matsutake graded, sorted, and packed for shipment to the Japanese market. The whole industry is sort of a pick-up squad supply chain, but you have to know your matsutake to do well.

Tsing digs into relationships: pickers with the forest, pickers-with-pickers, pickers-and-buyers, all the way to the Japanese that eat this bounty. In general, the further matsutake strays from the forest, the less personal it becomes. In Japan, matsutake picked, prepared, and served by loved ones fosters attachments to nature as well as to them. Human attachments fade away when a supply chain separates the matsutake from its sources. Some Japanese youth may taste matsutake only as a flavoring in processed food, a mere whiff of the nostalgic bonding formed in Japanese whose grandparents personally introduced it to them out in the woods. The smell and the taste signify the bond.

This re-bonding seemed the best developed in Japan, where matsutake became a special food, and still is. There, several thousand “satoyama” groups have emerged in the past twenty years. All are dedicated to remaking landscapes, nudging nature to re-vitalize itself. Some focus on the matsutake; some on various other plants; some on water management; others on nature education. They mix scientific discovery with old rural lore because for re-vitalization to work, they need working knowledge. Nearly all satoyama work is volunteer.

The satoyama groups are mixed learning groups. They learn by doing. They make mistakes. A report on one group noted that they had elevated collective trial-and-error to an art with a method called “do, think, observe, and do again.” This resembles the old Deming Circle, Plan-Do-Study-Act from the days when Japan’s industry rose from the ashes of WWII to become a model for the world. No one thinks that satoyama will restore Japan to financial glory riding on that manufacturing prowess, but satoyama may signify something more vital than economic status: how to revitalize both landscapes and human living in our industrial ruins.

Tsing opens with a critique of industrial development, capitalist, socialist, or otherwise, but concentrates on capitalism (business thinking) because it emerged as the dominant system. It is the culmination of human dreams of controlling nature. We would all live in comfort, enjoying 9-5 work until retirement. It has not worked out that way. Instead our environment is in ruins and humans increasingly live as precariats. The stories of the matsutake illustrate humans eking out a living off nature’s forces re-vitalizing disrupted forests.

We are living in a disrupted world. Disrupted ecologies. Disrupted economies too, struggling to continue a trajectory that earth can no longer support. These economies were built by wresting materials and energy from the earth, and “alienating” them; that is, separating us from any emotional attachment to them so that they can be traded objects, flowing through supply chains following the pseudo-logic of monetary guidance. That guidance can’t detect damage to the environment. It’s a “cost” external to its financial models.

The children of this debacle live precariously, sometimes wondering what has happened to them, most of the time wondering where they can find another gig. Matsutake picking is one that almost any able-bodied person can do, and it is one that, however temporarily, brings the picker back into intimate contact with nature. That appears to be what Tsing intends by learning to live in our industrial ruin.

Tsing didn’t quite say it, but she implies that mankind would be better off if we stopped exploiting one area of earth, ruining the landscape; then moving on. Instead we should adopt a mushroom strategy: adapt to whatever landscape comes to us, helping it to revitalize. For that matter, perhaps human history would be more honestly portrayed were it written by mushrooms.