Scale: The Universal Laws of Growth, Innovation, Sustainability, and the Pace of Life in Organisms, Cities, Economies, and Companies by Geoffrey West. 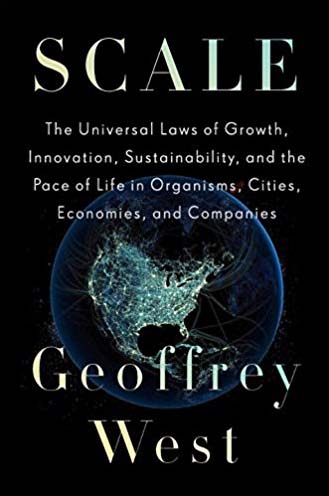 Geoffrey West is Distinguished Professor and the former President of the Santa Fe Institute. He is a theoretical physicist of note, but the book reveals his broad curiosity in many subjects. His passion now is collaborative research across many fields.

The book builds on the forte of the Santa Fe Institute, complexity theory and its applications. As the book’s long subtitle suggests, West strongly advocates integrating fields of thought, dragging science out of its entrapment in linear thinking. Complexity theory is one route out. Readers learn about emergence, self-organization, power law relationships, intelligent agent simulation, self-similar geometries (fractals), and chaos theory – all without having to be a polymath to grasp the concepts.

Complexity analysis has now been applied to a huge range of phenomena, and West has been on the inside of this action. His book is wordy, filled with anecdotes about complex system modelers and where they worked. He also dribbles out many curious findings, too many to include in a review. For example, lifespan is affected by body temperature; the higher it is, the shorter your lifespan is apt to be. Another is that a smooth EKG reading suggests a sick heart; it has too little resilience. A healthy circulatory system chatters with oscillations absorbing shock. However, West’s main theme is first to describe urban areas using scaling “laws;” then to compare them with companies, and finally to speculate on the clash between unending economic growth and the forces that are like to bring it to an end.

West reviews scaling theory and its relationship to complexity. He begins with the scaling of animals, beginning with Kleiber’s Law in the 1930s. Max Kleiber found, among other things, that the metabolic rates of animals at rest follow a three-quarters law. That is, the energy they require is not proportional to their weight, but to the three-quarters power of their weight. This relationship is explained by hearts pumping blood and nutrient through arteries that keep dividing down to the smallest capillaries. (While still disputed, and there are exceptions, this concept sparked investigation into scaling models to describe many phenomena, from the size of cities to human mortality.)

Scale modeling occupies a big chunk of West’s book, but all scale relationships are not quarter-power. For example, weight is obviously not proportional to height, but to total volume, not a quarter-power function of height. If a 6-foot man weighing 200 pounds grew in the same proportions to 12 feet tall, he would weigh, not 400 pounds, but 200 times 2 cubed, or 1600 pounds. His frame proportions could not support that weight, so he would need a frame dimensionally scaled to support 1600 pounds. Intuition about scaling has led to remarkable breakthroughs in engineering design and predicting consequences, including the blast radius of an A-bomb before one was ever detonated. But scaling errors have also led to big engineering and scientific mistakes.

To comprehend what West tentatively concludes, peek at the graph below. If weight were proportional to height, weight would scale linearly with height, obviously untrue. Weight being a cube function of the height, it is dramatically superlinear. On the other hand, metabolic efficiency scales up more slowly than height, so it is sublinear. In complexity jargon, any superlinear attribute rises faster than scale. Any attribute that is sublinear rises slower than scale. Whether an attribute is considered to have economy of scale in a business sense depends on whether the attribute is desired or not. 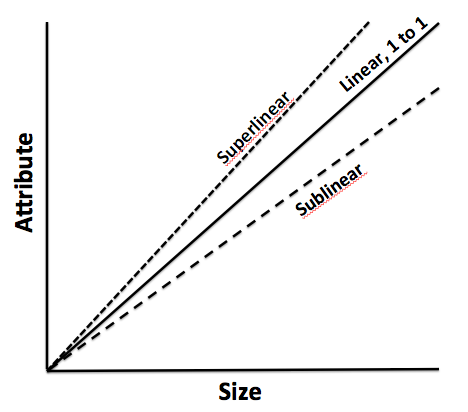 So what did West and the complexity researchers discover and how did they interpret it? Data from cities all over the world show that infrastructure and energy usage scale sublinearly, while indicators of social interaction scale superlinearly. Human excitement and pace of change goes up while the need for support resources goes down. In fact, social interaction indicators scale about 15% above linear and infrastructure growth scales about 15% below. People all over the world are moving into to cities to be near the action. On the other hand, a few may move out, seeking quiet.

But cities being complex, some undesired features also increase superlinearly, crime rates for instance. At present, the desired features attract more people than are repelled, so cities have few inhibitors to continued growth.

Data that describe companies scale differently. Only data from public, open companies were analyzed, so there are caveats. The death rates of companies show a high infant mortality, but of those that hang around a while, the scaling of revenue growth with size slows, while the scaling of expenses is slightly superlinear. In short, they become fragile, subject to death. At some point, they cannot withstand a shock on their systems. The half-life of S&P listed companies is 10.5 years and dropping. Something is happening.

Some big companies endure for decades. GM, GE, and DuPont are examples, and a few companies are hundreds of years old. They are small, and have either persisted in nearly timeless market niches, or they have been remarkably adaptive.

Cities exhibit bumbling inefficiencies, but they endure because to avoid death they have to adapt somehow. For example, a fire department can’t just declare bankruptcy and expire; something must arise to perform that service. Indeed, pressing for too much efficiency in public services may backfire. Adaptive work-arounds are safety nets.

West is not obsessed with models of any kind. He is aware that all his data is “course grained” so that they miss a lot of detail. As a physicist, West finds a satisfactory “Theory of Everything” to be elusive in cosmology, much less in environmental science, biology, or social studies. The tangle of complexity is greater; things change too quickly. A finding today may be different tomorrow. Processes evolve; they are not fixed for all time. He supports the rush toward Big Data, data analytics, and artificial intelligence, but considers them unlikely to displace theories if humans are to actually understand cause and effect. Nature will always race ahead of our comprehension.

Likewise, West has a modeler’s take on the prospects for environmental salvation. Of course, some big shift is necessary for us to escape the myriad threats from earth’s degradation. His logic is simple, humans cannot continue expanding their resource footprint at a super-exponential rate in a finite world. Ultimately, this growth must implode in a “singularity.” That’s when a model crashes in its own impossibility.

And West is skeptical that humans can adapt to the innovative treadmill that seems necessary if the present economic system is to continue expanding. The time line of significant innovations also follows a power law, and that trajectory portends paradigm-busting innovations at ever-shorter intervals. When they swell into a tsunami, human cultural adaptation can no longer surf upright in monster waves. Maybe we are already surfing the waves building to that singularity.