Andrew Warrington is President of Peerless Pump Company, a division of Grundfos 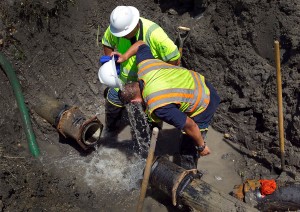 Water networks have problems that can only be solved by taking a total systems look at water issues. Our company is mostly in the pump business, big pumps like those supplied by QMAX Pumping for moving lots of water, and many of these machines are for municipal water systems. Globally, it’s estimated that pumps consume about 20% of total electricity generated. The vast majority of pumps move water and often more than 90% of the total cost of a large water pump is the energy it uses in its lifetime. These are not trivial issues.

In our industry, when we’re finished discussing with our customers that 10% cost of purchasing the pump – which we, unfortunately, spend too much time doing – it often comes down to pump efficiency. If my pump is 85% efficient and yours is only 84%, we have the advantage. Many enlightened customers (those that aren’t just concerned with that 10% initial cost!) estimate lifetime cost, so they may factor efficiency into evaluation of bids in addition to the capital cost of a pump. Initial price and efficiency – two factors we can measure with relative precision, everyone can understand it, so that’s what the industry concentrates on, usually one pump or one project at a time.

Is there a better way? Some of us think we need to get smarter and start looking at improving the total water system instead of competing for the little, often unrelated pieces of the action. Although we should keep improving them both, pump cost and minor pump efficiency differences are piddling compared with the overall resource footprint (and costs) of a big water system.

Unfortunately, data on system water losses are unclear. Water companies generally know how much they pump. They know how much went through customers’ meters. The difference between these numbers is often more than 20%, and sometimes much more. For example, the aged water system of London, England is reputed to have losses in the vicinity of 50%. Some older American water systems have similar losses.

Think about it – if you extracted, filtered, treated, transported, and pressurized your precious product and then lost half of it – should you really be interested in that last 1% of pumping efficiency or that 5% price saving on less than 10% of the total cost of part of the capital cost. Are we missing the point?

Some losses are easy to see, if not measure. For example, when a fire department opens a hydrant, usage may be roughly estimated, but not paid for. If people open a hydrant to cool off in hot weather or a vehicle rams a hydrant, losses aren’t even estimated. A new fountain in the middle of your street is hard to miss.

Mysterious losses are also present in the form of leaks in pipes hidden from view. Systems with old piping, sometimes over 100 years old, constantly battle leaks. Gushers are obvious. Thousands of tricklers are not. It’s like guessing how much air you’re losing from a leaky tire. More than water is lost, excessive energy used to pressurize and pump all that water is wasted too. Older systems with lots of piping add-ons and tap-ins have more leaks and take more pump energy. Where does the water go? Does it do damage to property on its way there – is that cost calculated?

Water companies usually don’t want to trumpet these losses. First, the public is apt to blame losses on poor management without understanding the tangled nature of the problem. Over time, users come to expect water to be a “given” – convenient, cheap, and automatic. They don’t want to pay higher water bills for upgrades. If by chance, they are willing to do that, they dislike having streets torn up or service interrupted while the upgrade is taking place.

The easy path for management is to do the minimum necessary to keep the old system running with reliable, safe water and bill as much water as possible through meters to keep per gallon rates down. Locating and remedying leaks is an ongoing operating expense, but it has to climb very high before major replacement of piping is financially justifiable by conventional business reasoning.

Unfortunately many upgrades to pumping systems are driven by complaints – for example when we cannot get the water to make the showers work at the extremities of the system. This is especially true in the summer when sprinkler systems, irrigation and other water uses put more and more demand on the creaking infrastructure.

Buying one of our big high efficiency pumps to hike the water pressure in a degrading water system to produce enough pressure at a customer’s house might elate our customers and stockholders, but it may also make the system problems worse. Here’s why:

Obviously, water pumped through bigger, smoother, straighter pipes over shorter distances takes less pumping pressure, therefore less energy. But that’s not what we have. Most old water systems use big pumps from a central source to move water a long distance to the outer reaches of the system. Keep extending a system to cope with urban sprawl, and eventually undersized, old, corroded, and blocked up pipes convey water a long distance through a tortuous route; a higher-pressure pumping situation.

Put more pressure on a leaky system to get that pressure for a good shower miles away from the pump and losses from leakage go up, sometimes way up. Overpressure increases waste. Professional water managers understand this and control it as best they can with the system they have.

Water systems must also handle seasonal and daily variances in water usage. Typical peak demand runs over 70% above the average, offset by low load periods. Swings in water demand can be considerable, even if a company promotes watering lawns at night and other such measures to balance the load. Control of the pumps attempts to assure service by keeping a constant pressure under all load conditions. A constant 40 psi is the typical target at the consumer’s stop cock.

Constant pressure at the pump means varying and excess pressure in the system – often well over the target at the consumer’s shower. This creates problems even greater than the energy required to create that damaging pressure. One of the more serious ones is water hammer. This is caused by sudden changes in fluid momentum in a piping system under pressure. (Some readers may recall hearing the clang of water hammer in old steam radiators warming up.) The inertia of water from bigger pumps creates more damaging water hammer when flow rates change quickly. This, plus lesser wastes of momentum change can more than offset the presumed benefit of a bigger, higher efficiency central pump.

The predominating water system today has two sets of pumps, one on-line running near 100% whenever possible for better efficiency, and one identical pump system in reserve in case of failure. Pressure is regulated by control valves (rather akin to driving with one foot on the gas and one on the brake in your car – more energy loss) and variable frequency drives to the pump motors. System reliability trumps other considerations. Imagine a city without water.

Even with the will to replace systems, fast-track “shovel ready” projects to do it are unfeasible for operational as well as financial reasons. In a city, one has to map traffic detours and plan work schedules to minimize service interruption. A city full of mini-leaks is going to live with them for a while – at least if we keep thinking the way we think now.

If we think total system instead of pieces, parts, and politics, we can start alleviating water distribution problems with smart systems. Analyze and simulate the piping network. Locate places to site smaller pumps that don’t have to push water as far, getting rid of big surges and fall-offs. Instead, feedback from sensors should let these pumps react and “get ahead” of rises and falls in pressure and water demand.

In geek speak: the logic of the control system is “proportional pressure functionality.” In plain English, use a larger number of smaller pumping systems interconnected with smart systems to cut network energy costs by over 25% and pesky leakage loses by over 15%. Plus reduce the damage from water hammer, pressure induced cracking, sinkholes and flooding from pipe breaks. Lower water pressure in your system is just like lower blood pressure in your body – the lower it is, the healthier the future! From a user’s view, pressure at the tap should be more consistent, conversion should not be highly disruptive, and water bills should not rise. Furthermore, payback should pass the conventional financial logic tests, so perhaps smart systems have a chance in today’s marketplace. Smart water is getting a play in Europe with a network called SWAN. It’s barely begun in the United States.

Look a little further, however, and success with smart systems should be an entry point to more progress. Suppliers of equipment for smart systems have to work with water companies and their customers to improve the water system as a whole. Perhaps that will lead to more systemic thinking, asking fundamental questions, like:

Why do users want to use so much water (some much more than others)? Can demand be reduced? Do we really need that green lawn – should we not think about a beautiful landscape more appropriate to the place in which we live? Does our front yard in the desert really need to look like the 18th hole at St Andrew’s?

If we strategically place sensors on our distribution pipes and couple it with a smart control program, can we delay the time at which we have to dig up the road and replace the pipe?

Can we identify the leakiest piping and prioritize replacement without excessive public annoyance or expenditure? These questions do not address issues with the sources of water from which big systems draw. Those can lead to system separation of drinking quality water from gray water (as from runoff) that can be used for other purposes.

But as with all other system changes, one solution may introduce new kinds of problems. For instance, the data communication for a smart system would probably feed some form of SCADA system (control software). Would we then have to defend against miscreant malware like Stuxnet trying to infect the system?