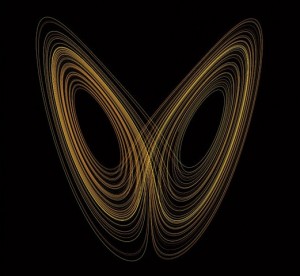 This title is a mixed metaphor. Picture a social butterfly, flitting from person to person and group to group. Then picture the butterfly effect from chaos theory, “Can a butterfly flapping its wings in Brazil set off a tornado in Texas?” Are these connectable? Yes.

What do they have to do with promoting effective action to cope with Compression? Quite a lot if one recognizes that a major inhibition is not technology, but human culture in shock adapting to rapid change. Bad as our problems may seem, none are more fundamental than whether the human race can avoid extinction by its own cultural inertia.

To math purists, the butterfly effect refers to non-linear, deterministic systems whose behavior is sensitive to slight changes in starting conditions. Internal feedback loops magnify teensy differences into big ones. But human social systems are even more complex. They are not deterministic systems; else we would be automatons. Events out of the blue zing us all the time, but despite this, human cultures tend to lock up in sets of beliefs, some self-contradictory, and many not self-evident to those holding them. Beliefs = our purpose for being, what we deem of value, what success means, how the world is presumed to work, or ought to work, and on and on.

Within human social systems, many players pulling the culture in different directions offset each other in a tug of war. In a company, lean practitioners want a lean culture; others want one that is profit-motivated, “customer-centered,” or tech-savvy, so the mishmash may or may not cohere. Rifts may be open and ugly in organizations like school boards. Stir in some dominant alpha competition and the result is a cacophony of instigation, emotion, and persuasion that we call “politics.”

Change agents would love to tap a key influence to change a culture — reset “starting conditions” and just let the desired change emerge. Doesn’t happen. We hang onto existing belief systems that got us here, rationalizing how they still work while contrary evidence piles up. Culture change is a migration of collective core beliefs oozing through swamplands of mental and emotional conflict.

A shift to Compression Thinking is so contrary to prior beliefs, why should we think that changing them quickly is even possible? Several documented ways to do it give hope:

One is reframing concepts and issues in a desired direction. Framing hooks any new idea to an existing mental set, positioning it as an extension of prior beliefs. Framing is a well-studied standard tool in advertising, public relations, political speech, and propaganda. Targeting a person for emotional reframing morphs what we see in the frame: “terrorist” or “heroic freedom fighter?” So much clever reframing hits us daily that we hardly notice attempts to suck us into another belief system, or to fracture our present one.

A second way is by creating dialog, coaching people to actually listen to each other. If well done, people begin to see assumptions that have been so automatic that they were unaware of them, open their minds to views of systems that they had ignored – and maybe – pull together in a common direction. This is harder than reframing, but it strives to create social cohesion. This approach is identified with the Society for Organizational Learning (Peter Senge), Cognexus (wicked problems), and others.

Third, if we first learn to do differently, we are apt to begin thinking differently. Mere philosophic learning or emotional concern does not necessarily break old habits of doing. The approach of lean conversions is to first change the systems of work and the approach to problem solving. Observe a rule to keep problem discussions on the process, not on blaming others. Keep plugging. In due course, mutual respect for people will blossom, and eventually we will have an organization so adept at learning by doing that this capability can be extended to improving systems outside the company, and bigger than its former commercial interests; for example, systems on which local or regional quality of life depends.

All three approaches are “social butterflies” attempting to pollinate groups with new thinking. Reframing sounds subversive. However, the other two methods are just more subtle attempts to influence cultures. A dedicated change agent may use all three methods – and more. However, more important than any method is change agent authenticity, personifying the total change that the leader wants others to emulate.

However, the dialog method is preferred. It is the least manipulative. It encourages people to think through why changes should be made as well as how. People that are heard out are more likely to rethink deeply and reframe old beliefs.

Respect for people means recognizing that no matter how limited and misguided we think other people’s beliefs are, we are all convinced that our present beliefs are best for us, if not all humanity. Except the few psychopaths among us, everybody means well.

Finally, let’s avoid tool traps. Practicing tool use may be necessary, but we must get on using them for something important, coping with Compression. The shift in human beliefs is bigger than almost any that has come before.