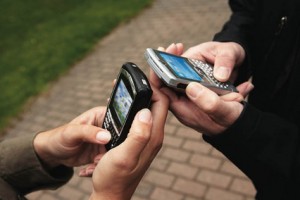 CNN is running a series on the impending shortage of spectrum to carry the increasing demands of smart phones. Without action, the Federal Communications Commission (FCC) anticipates the shortfall to be serious by 2014. Fast growth in phone traffic presages the issues of Compression in many other domains, but happening in slow motion.

Smart phones gobble at least 20X the spectrum of voice only, and i-Pad tablets over 100X. We love to transmit digital pictures and videos. Since 2007, global phone traffic has nearly doubled each year, a rate expected to continue. When carriers cannot keep up with demand expanding capacity, many users experience problems – slow speeds, dropped calls, inability to connect. As carriers enter a chronic spectrum crunch, expect this to be normal.

However, the spectrum limit is not a fixed wall. The FCC splintered allocation of the spectrum to carriers to promote competition, but this did not improve overall efficient use of it. A little more spectrum may become available, but the total electromagnetic spectrum has more uses than mobile wireless, so the squeeze involves many parties. Carriers are working hard to compress data so that they send more information using the spectrum they have. And of course, carriers are maneuvering to be the last one standing as the crunch plays out, while the FCC wants to promote competition.

Meanwhile, back in the slow zone, concerns about the long-term effects of cell phone use on health and brain activity on 4.8 billion phone users, especially children, have not been put to rest. Of the major world carriers, Vodafone seems to be the most forthcoming about this. Brain researchers like Dr. Vina Khurana, who keeps a list of studies on cell phone radiation, won’t let the issue go away without resolution.

So what will you and your business do if you must cope with wireless transmission limits? And oh, do you have a plan for disposing of cell phones at the end of their useful life?