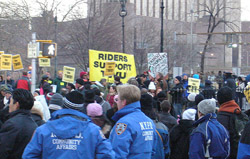 The Compression Institute is crawling toward developing a movement unlike any known precedent. Organizing ourselves for vigorous learning within some legal framework is, from a human view, a bigger challenge than the global messes we seek to address. At any age, stepping up to a very different view of our purpose and role in life is an emotional transition, not just an intellectual one. If we can’t learn how to function more effectively, we give up and “go on strike against ourselves.”

History is filled with grand dreams and survival schemes that died for inability to act from a bigger viewpoint. Take the quirky case of South Bend Lathe. In 1975, as the company was entering decline, its employees purchased it 100% in a no-down payment take over of existing capital, as pure a version of an ESOP as one can get.

However, the people involved could not break their old views of their objectives and their roles attaining them. Top management insisted on voting control, and unionists could feature themselves only as wage earners. In August 1980, unable to imagine governing the management, the union went on a ten-week strike against themselves, doing what they knew how to do. It had always worked before.

A participant’s account of this story is on line, but it neglects an important factor. At one time, South Bend Lathe dominated the American market for mechanical lathes, but in the 1970s lagged the industry developing computer-controlled machines. No financial reorganization could have made hidebound South Bend Lathe survive that shift.

A second example is the Antioch Company, Yellow Springs, Ohio, formed as an employee-owned printer in 1926 by a staunch socialist, Ernest Morgan. He invited in a union, and printing union literature boosted the business. In the 1930s Antioch’s unionists went on strike to raise their dismal wages. Ernest Morgan, true to his beliefs, walked the picket lines with his workers, thus helping them strike against themselves.

About 15 years ago, Antioch hit a prosperity streak in Creative Memories, a photo album business sold in kitchen parties. As that fad ebbed, so did Antioch’s financial fortunes, and for various other reasons, it entered bankruptcy. Employee owners that had lost their pension plans sued the leadership team for breach of fiduciary duty. Remnants of the Antioch operations reconstituted themselves under various plans, and the village of Yellow Springs is trying to re-energize itself in an ecologically sustainable pattern.

The morals: Sharing gains is a wonderful win-win. Sharing financial losses is painfully divisive. Actually collaborating to energize a work organization or an economy to be environmentally sustainable is grubby work, impossible if everyone is motivated mostly by money. Unless we can step up to viewing our responsibilities as bigger than our rewards, or the fairness of them, we’ll fall back on going on strike against ourselves.