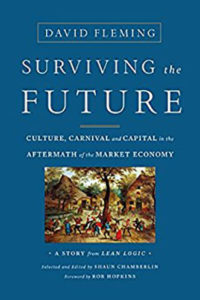 Surviving the Future by David Fleming and Shaun Chamberlin

David Fleming worked on the basis for this book for 30 years. Hardly known in the U.S., in the UK Fleming obtained a PhD in economics, was an environmental activist; at one time secretary for the Green Party, the founder of The Other Economic Summit (always held to counter the periodic G7 summits), an early proponent of peak oil, a writer for magazines – and for years fascinated by lean manufacturing. Shaun Chamberlin organized his thoughts into this book after Fleming died in 2010.

The book opens with Fleming describing his fascination playing the CEO of a company in a lean simulation using Lego blocks. As CEO, he was harried in the initial phase of the simulation, but when the simulation reached the small lot, full pull stage, Fleming realized that he no longer had anything to do. He concluded that lean was really a strategy for decentralizing operational decisions, and he extended that thought to proposing that a post-expansion economy had to be decentralized – lean.

This theme goes through his book while he works over the fallacies in conventional economics and the foolishness of large-scale enterprises with top down control. Fleming became a proponent of local economies that are much more self-sufficient than today. He helped found the Transition Town movement for local self-help and self-sufficiency.

Fleming is a fun read in places. He contended that post-market economics had to include space for people to enjoy themselves, to put on local carnivals now and then. Pedal-to-metal efficiency isn’t life.

But local economies depend on human trust, and Fleming noted three essentials: Reciprocal exchange. Obligations and duties that do not depend on money. And a sense of community, the glue of identity around which reciprocity forms. 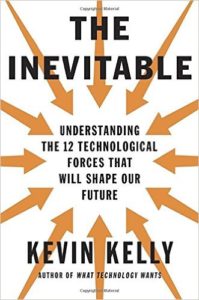 The Inevitable by Kevin Kelly

Kevin Kelly is probably the best-known writer extolling the future of all things digital. His comprehension of ecological issues is limited, but as a denizen of Silicon Valley, he is an insider on technical advances. He was a co-founder of Wired, and he is still wired in. The book has been out for six months; not dated yet, but hurry. In Kelly’s world, innovation speeds along at triple time.

Kelly does not foresee the internet of everything as a human utopia. In fact, he considers flawless utopias to be boring because we only learn from mistakes. He’s well aware of the hazards lurking in a total on-line environment, which he sometimes calls the “technium.” Kelly foresees a “protopia,” a future of constant churn and learning.

We live in the Blind Now; we cannot foresee what technology will emerge, and even less what people will do with it. We can only see from the framework of the old. For example, no more than 20 years ago no one imagined that by now nearly half of us would report being stressed by habitually checking our smart phones.

And this revolution has a lot of running room. Soon you will be able to Google your refrigerator (see what leftovers you might use for dinner on your way home). Kelly sees artificial intelligence in services available to everyone from the cloud, and essentially for free. Good design will create artificial intelligence that we do not have; doing what we can’t do, not what we can do.

For example, the best reason to create a robot is to do what we can’t, for example hold a line while welding without losing concentration or getting tired. We can even program a computer to conceptualize problems that we can’t, but then how do we know? Computers can already both pose math theorems that humans did not concoct, and then prove them – and it’s difficult for human mathematicians to check their work.

Trends now that should accelerate: Books and articles that readers can annotate and pass around. Wikipedia is an early example, and we’ll likely see a Wiki-everything. The publishing industry, like the music industry before it, is going to be shredded and transformed into something else. Much more communication will be via photo and diagrams. That transformation has begun.

Kelly also foresees that manufacturing by 3D technology will de-materialize the economy. One way to express this is a higher ratio of GNP per kilogram of material used. This can be done through lighter designs, more customization, and “Uberizing” everything to share material goods. Robots will make commodities, but humans need the experience of customizing and creating; otherwise we will just be robots ourselves.

This review only covers a few points. There are many more. If you want a great ride through technology, get the book. 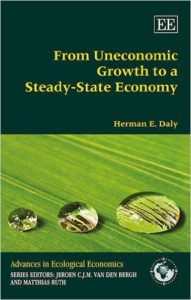 From Uneconomic Growth to a Steady State Economy by Herman Daly

Daly is the doyen of environmental ecologists, and this book is the distillation of about 40 years of his thought on the subject. It’s not available on a reader, and it’s pricey, but worth it if you want a great reference on almost any angle of economic argument, A to Z. Daly has burrowed into the subject for decades, and it shows. At the end are a series of short commentaries on contemporary economic issues.

Decades ago, Daly refered to the present economic system as growthmania run by growthmaniacs. Any transition from this will be tumultuous, and no one can create more than a foggy vision of what lies on the other side. He wants an economy with minimum central control; therefore the most effective way to throttle back is to set quotas on raw material extraction and tax it, rather than penalizing end-of-pipe pollution.

Beyond that he does propose a direction. Put minimum faith in our ability to develop a new, ideal society. Put maximum faith in the regenerative powers of life itself and in the possibility of moral growth. Top priority is to arrest the physical processes and incentives that perpetuate unlimited growth. He has a whole section called, “Not Production, not Consumption, but Transformation.”

To do this, one avenue of persuasion is that growth does not make us happier. Once our basic needs are met, more and more consumption does little for us. Couple that with an attack on quantity-based performance measurements. For example, he cites the warped responses by Navy dentists when their performance was judged by number of teeth pulled per month – and of professors when judged by number of papers published.

The economic transformation needed is to recognize that our limits have drastically changed. We do not have a shortage of capital. Far from it; excess capital is sloshing around the world. Instead, we are constrained by shortages in natural resources, by the amount of tillable soil, or the number of fish in the sea. Recognizing that upends conventional economics, which blindly assumes that all things are substitutable. For example, it minimizes the importance of agriculture because it has become a small fraction of GNP without recognizing that without anything to eat, the rest is irrelevant. We can’t eat digits from a computer. Daly’s exposition of the fallacies of measurement by GNP is alone worth the book.

Daly is a philosophical economist, and there aren’t many. Most are model bound, with little questioning of assumptions. The most interesting sections of the book concentrate on the reality and importance of “purpose.” He notes that deterministic materialism that came from the enlightenment performs a useful role in dispelling misleading superstition. However, in economics that leaves no ethical base for deciding right or wrong except whether it pays; individual market preferences are the ultimate standard of value. It makes no difference whether that preference is to eat the last fish in the sea.

Daly refers to the lack of direction or purpose in economic thought as the “lurking inconsistency,” and it infests many fields of science, not just economics. A quote summarizes much of this, “If we think that our world, our lives, and our conscious, self-reflective thinking are just a happenstance of matter in motion – a temporary statistical fluke of multiplying infinitesimal probabilities by an infinite number of trials – then it is hard to see why we should make any sacrifice to maintain the capacity of the earth to support life, or from where we would get the inspiration to do so.”