The Symphony of Profound Knowledge by Edward Martin Baker 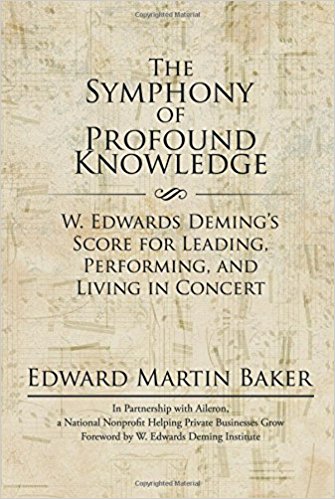 Baker, now retired, was a staff executive with Ford Motor Company who orchestrated Dr. W. Edwards Deming’s interactions with that company, and he was close enough to Deming in other settings that he came to know Deming’s teachings very well. This book is a long-awaited reflection on Deming’s thought by an insider looking back on it.

The theme of the book is integration. For example, Baker questions why we have separate institutions for work, for education, and for entertainment. Why don’t we put them all together? However, most of the examples presume a corporate world, much as it was in the 1980s. The message addresses the inside of an organization. By contrast, T. Collins Logan’s ideas on “unitive principles” for an entire society try to stretch from local and concrete to global and spiritual. Deming was not overtly spiritual, but Baker describes how his religion and his music influenced his thought.

Dr. Deming’s famed circle and his14 points get little coverage. As Deming evolved over time, these early concepts matured into the System of Profound Knowledge (SoPK), Deming’s final body of work. The book is organized around SoPK, which Baker embellishes, and ends with them being integrated as if playing a complex symphony that blends into one grand aesthetic performance. In an organization that functions by SoPK, people should mesh so well that they can play a symphony as if it were improvised jazz.

Here are the four components of the System of Profound Knowledge.

Much of Baker’s book dives into deep-level Deming with refreshers in basics along the way. If you are looking for a starter kit, this isn’t it. However, toward the end, Baker does present some “Partner Rules” to invite others to think with you:

A few other observations caught my eye:

In science, a theory is a concept with evidence to support it, but the evidence is not so overwhelming as to cancel doubt. New evidence can modify the theory or completely negate it. In Deming world, any theory is also the creature of a person’s life experience and mental map. (Caution: a map is not the territory – reality.)

Can we learn anything by observation without a theory? Deming says no. Our theory tells us what is important; therefore what to look for. This reviewer thinks there are stumble-on exceptions; we can happen on something unpredicted and never before seen, no inkling at all, but this is rare.

If there are no constraints on commodity competition, lowest possible price being the goal, eventually this is a disaster for all involved.

Perfection exists only in the mind; reality never gets there.

In a large company, fostering integration of the top staff is high priority. If an organization does not come together there, it can’t work as one team anywhere else either.

Political Economy and the Unitive Principle by T. Collins Logan 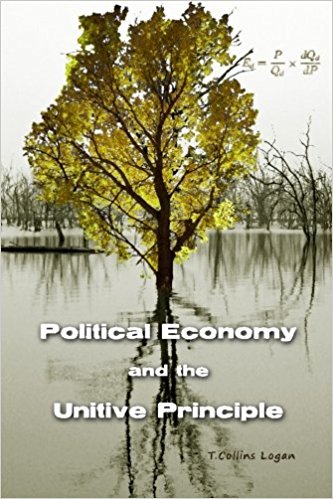 In this issue, I will not try to review Logan’s work in the depth it deserves. Next issue perhaps we can comment on it in relation to the Compression concept of Vigorous Learning Organizations. Logan has taken on the supreme task of trying to project how we can convert the present world of “extreme” market capitalism into something that is more satisfying to both humans and to the environment on which we all depend. He is delving into an area that in the last chapter of the book Compression, was simply described as humanity forming a “tribe of the whole” and left at that. A great deal of groping by different people is trying to bring light to these issues.

Logan digs into mankind’s 21st century condition deeper than Deming, although were he still alive, Deming and his peers like Ackoff might have. His premises center on concepts of property and how we relate to it, and the early chapters delve into different concepts of property and what they mean to us. Logan is familiar with modern economics, technology, and software, but concentrates on the foibles of man, much as Deming. He also concludes that mankind can save itself, and maybe our entire ecology only if we reform ourselves.

Be prepared for different language and some novel terms, like “memeplex,” which is digital age terminology for what older writers might call folklore, but memeplex signified that core beliefs may be generated and regenerated more quickly. Logan proposes the idea that we might engage in “moral creativity,” actually willing our way to changes in ourselves.

The unitive principle is not accepted by computer grammar, but it is embedded in holistic nourishment and moral creativity. Sounds like New Age all over again, but Logan arm wrestles the idea into something that, with effort, real people might actually do.

Logan proposes that we can adapt ourselves to a very different concept of life satisfaction if we try. We do not have to remain beholden to high levels of consumption to be happy, and nature is saying that we have to do exactly that.

Rolling on past a review of ancient wisdom, at the end we come to Logan’s conclusions on how to approach our modern plight. Any avenue out requires us to factor more and more variables into our valuation processes. We must become more skilled in developing the breadth, depth, and specificity of our moral choices. Autocratically imposing needed change is probably the route to extended war, so what can be done short of global dictatorship that would be resisted. Logan favors “rapid system reform,” starting with rapid values adjustment at the “bottom of society.” Privileged elites and hard boiled conservatives will resist anything, but they can be worn down.

One can carp about Logan’s supporting arguments, but his main point cuts to the lack of a human heart in the current system. We are meant to be more than competitive, consumptive automatons.

So does moral creativity and rapid values adjustment have a chance?