Why Economic Theories Are Screwing Us

Talking to My Daughter About the Economy: or, How Capitalism Works – and How It Fails, by Yanis Varoufakis and Jacob Moe 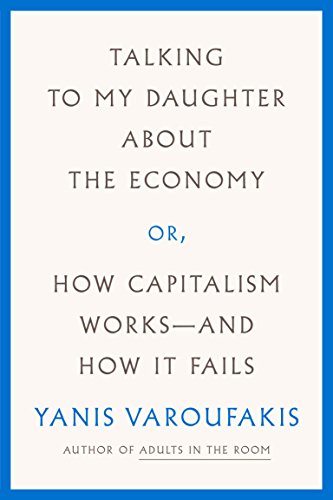 Yanis Varoufakis will be heard from again. He attracted global attention as the Finance Minister of Greece who tried – and failed – to negotiate Greek debt relief with the European Union. He’s one of the economists looking for a new system, and truly global. He’s taught at UK universities, the University of Sidney, the University of Texas, and the University of Athens; plus he’s a TV commentator, and a prolific book author (four in two years with the help of co-authors), all by the age of 57. His latest book is written as a letter to his daughter, growing up in Sydney, Australia while he’s in Greece.

Varoufakis is also a politician poking the “establishment.” In 2016 he founded the Democracy in Europe Movement (DiEM25), which means debt free by 2025. Its aim is a European political union “by the people,” rather than a patchwork of countries with open borders and common currency, but ruled mostly by remote technocrats. As this is written, both Italy and Spain are politically convulsing, just as Greece did earlier. Underlying this, about two trillion Euros in non-performing bank debt have yet to be written off in the EU. In the United States, reports from bank regulators suggest that compliance is being relaxed. At some point, a global debt implosion awaits.

Although largely unaware of this mess, disaffected UK voters sensed that EU technocrats were ignoring them. They opted for Brexit, just as US voters opted for Trump. The disaffected are united mostly in wanting to bust this status quo.

So who is Varoufakis? His book to his daughter reveals Varoufakis’ deepest beliefs without the detail of his 2017 Adults in the Room, about negotiating as Finance Minister with insiders trapped in a doomed system, each bound to play their roles to the bitter end, as in a Shakespearian tragedy. And Varoufakis is writing to a young person, one of the youth that increasingly question the existing order. So does Varoufakis.

Varoufakis emphasizes to his daughter that a market economy excludes everything whose value cannot be monetized or commoditized, but the exclusions are vital to our existence. Money can’t buy the exhilaration of a sunrise or the life satisfaction of raising a difficult child into a responsible adult – or of being a difficult child who found herself.

We can’t put a number to feelings of social worth, to knowing that one is contributing to the common good, or to sensing that we are leaving the planet a better place. And if we monetize these values, they diminish. A joke you pay to hear is not as funny. Citizens in countries where blood donations are strictly voluntary give more blood than if they are paid. But the ultimate in monetary nuttiness is thinking that nature can be bought off.

Varoufakis holds that governance and politics must remain linked to an economy, a link unbreakable by crypto-currencies and blockchain. Why? Monetary economies all have crises – crises resolvable only by controlling the debt and the money supply. To learn more about the various cryptocurrencies available and how they function, you could go to beincrypto.com and find articles such as this on XLM for example, a competitor of the well known bitcoin. Control of money may be deftly disguised, but it is ultimately political, and always by elites. And elites everywhere will instinctively resist ceding this control. (Within chain governance is emerging as a significant crypto-currency weakness, supporting Varoufakis’ contention.)

To build his case, Varoufakis summarizes economic history, starting with relatively egalitarian hunter-gatherer tribes. Their survival depended on social stability. Mutual responsibilities were reinforced by belief systems – myths that describe how things work. Myths bind a tribe together in a common understanding that works for them.

Agricultural societies were feudal. All employed some form of serfdom or slavery, or both. But these systems were stable. They endured for millennia. Most people were born into their roles. Unless you were a royal, personal options were limited to hand-me-down trades. People cheated, lied, played, and fought wars, but they had a limited concept of progress. Life just happened. No competing interests strove to achieve anything new, so technical and social change was slow.

However, agricultural systems required trading, so money became central to them. Social and monetary stability depended on confidence in the current regime, while greed and ambition often sparked royal strife. Stability required a religious leader to proclaim that a government (and its money) was legitimate and God ordained, decreed by myths of divine rights. In Islamic states, economic life and religious life still intermix. In democracies, constitutions substitute for divine ordination, but everywhere devout believers still seek to codify their version of morality into law for everyone else. And to be trusted, all secular democracies must still invoke a mystique about money.

Today we are testing old myths. The Marshall Islands just introduced the Sovereign, a national crypto currency to replace the US dollar. Venezuela introduced a crypto currency, the Petro, to escape sanctions in US dollars. So far there’s no word on how either country is invoking a story to inspire public confidence in their new money.

Instead of divine ordination, modern governments are propped up by a common ideology, a set of shared beliefs that the existing system is one that can be trusted. Varoufakis describes the emergence of capitalism and its ideology 300 years ago as The Great Transformation, typified by the British enclosure laws.

As transactional commerce grew, landholders could gain more money by raising sheep than by extracting it from the peasants. Feudalism collapsed. Fence in the land, raise sheep, and hire some peasants as shepherds. Factories springing up hired the excess peons driven into town. Basic concepts shifted: work time vs. my time and labor-management disputes grew apace. A feudal society could not imagine slicing time into pieces to be bought and sold, much less time as money, and certainly not monetizing almost every experience. But that is what market economies have now become.

Monetization is becoming unreal. You can buy a phone app to prompt raising your consciousness. We are degenerating into marketing our avatar personas as brands on-line 24/7. Varoufakis regards this as an unstable society, flying too high, ready to crash like Icarus into the sea. Structural monetary reform isn’t enough. Problems with money begin with our social psyche. Deep social change must come, and soon.

Referencing the movie, The Matrix, Varoufakis implies that the system we live in is as unreal as that movie plot. In The Matrix,humans have become a viral plague on the planet. To save it, a cyborg species using artificial intelligence subjugates humanity, turning human bodies into zombies that power their computers. Humans are so dull witted that they don’t understand what is happening.

Environmental disaster does not register in a monetary system; anything not monetized is not seen. If many social and environmental factors are considered, it must be external to that system. A hundred years ago many economists forecast that technology would let us cut back to 15-20 hour workweeks. Hasn’t happened; the system induces us to concoct wants that we never had before, while optimists remain oblivious to its excesses biting back.

In addition, just like feudal lords, the wealthy assume that they deserve whatever they get. Perhaps that’s an instinct latent in all of us. In 2002, Varoufakis conducted an experiment to test this idea; 640 people unknown to each other, except as either “red” or “blue,” negotiated money transactions multiple times. Inevitably, some began to behave as if people of their color deserved more than people of the other color. The people of “the other color” learned to expect less. Perhaps that is why deep social change is so difficult. (Varoufakis did not mention this study to his daughter.)

Being Greek, Varoufakis uniquely defines an idiot. It’s from the Greek, “idiotis,” meaning a privateer concerned only with himself, able to see only his version of a situation. Ergo, economic man is an idiot.

In the end, Varoufakis imagines a virtual system, HALPEVAM, that can give his daughter the best of all possible worlds, satisfy her every desire. “Don’t fall for it,” he admonishes, citing John Stuart Mill, “It is better to be a human being dissatisfied than a pig satisfied.” Varoufakis is cautious about the economic use of artificial intelligence.

Finally, he warns his daughter about professional economists. They invent lovely mathematical models. They analyze scads of data. But they are not really scientists. Their ideology grips them as if it were a religion that their baffling equations must constantly re-interpret. At their best, economists are only human philosophers.

Varoufakis doesn’t picture what an environmentally benign economy might look like. He recognizes that the physical economy can’t grow forever; therefore unpayable debt must be forgiven. Good start, but it does not connect our grand environmental challenges to any ground level changes that we should begin immediately. Never mind. Although this is the most urgent matter of our time, the rest of us are still dithering about it too.