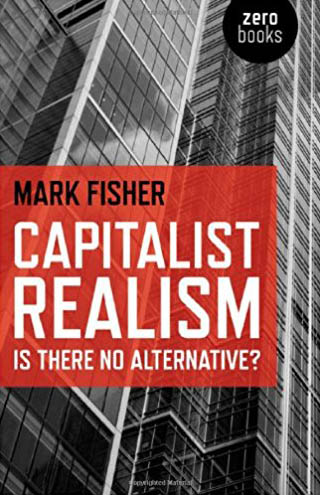 Capitalist Realism: Is There No Alternative?, by Mark Fisher

The initial promise of this book was a unique critique of economics. It is that. It is not a structural, fix-the-problems proposal, but an artful expression of anguish from a guy descending into depression because of “the system.” In 2017 at age 48 he took his own life, leaving behind a different twist on “quality over quantity.” To be effective, a system of work must have deep meaning for the people working in it.

So who was Mark Fisher? A British critic of pop art and music, and a gifted, prolific writer in major publications. For example, his word craft describes America as a “branded sprawl of replicating franchises.” Fans called Fisher’s K-Punk blog a one-man magazine interpreting modern life through pop culture. As a PhD academic with an appointment at Goldsmiths, University of London, Fisher had a broad grasp of many issues, usually expressed as analogies to movies or music. His most pithy description of Capitalist Realism is:

“It is an unconscious fantasy structuring our social reality.” In practice Capitalist Realism is nothing that it constantly pretends to be; it’s an ugly emperor clothed in fine garb.

Fisher alludes to neoliberalism in Britain, or in the United States, to the “Chicago School” of economics, or just plain “business think.” Adherents presume it to be superior to any system before it. For example, Margaret Thatcher curtly dismissed critics with “There is no alternative,” often using only that phrase’s acronym, TINA.

Fisher’s deep funk is that the “the system” destroys our humanity, psychologically as well as physically, reducing us to subservient automatons. Other writers in the same vein include Umair Haque, who labels the excesses of social media and Silicon Valley as “Technofeudalism.” Monetization bounds all human activity. Fisher warms up by noting some common delusions propping up Capitalist Realism (business think).

Benevolence from corporations or affluent individuals will fix all social inequities. (Hold a benefit and donate the proceeds to a worthy cause.)

Running everything like a business is efficiency. Examples are education and healthcare where efficiency is driving us broke. Further assume that public bureaucracy is worse than private bureaucracy. Anyone frustrated by automated call centers or performance ratings knows better. Efficiency in separate, arm’s length companies does not translate into better living or social well-being.

Endless growth is baked into the system. Without endless growth, it doesn’t know what to do. Consequently the system is intrinsically opposed to serious measures to assure environmental survival. The conflict serves up greenwash and symbolic changes. It can’t imagine decreasing our ecological footprints.

We are free, independent agents, making our own way. Actually we are trapped in perpetual consumption, continuous personal development, 24/7 tracking of everyone, on-call job tethers, paying bonuses instead of wage increases, and technological rat races that complicate life. None of this adds intrinsic meaning to human existence. Labor unions still address the work disciplines and fissures of the industrial factory age, which Fisher calls Fordism. Unions have not repurposed to counter the invasive, stress inducing disciplines of the precariat world, otherwise known as the gig economy.

In a world of permanent transience and constant distraction, winners take all; everybody else is a depressed loser. Fisher cites figures on “psychic morbidity” increasing among younger people. A monetary health industry prefers chemical theories of mental illness, seeking billion dollar molecules to treat it. If there’s no money researching social causes for depression, why look for them?

Precariat existence fractures traditional ties. Start up entrepreneurs bounce between euphoria and depression, just like stock markets. If everybody is an entrepreneur, expect mass depression among atomized individuals detached from zones of stability like families, neighborhoods, churches, and clubs. Despite insisting that they are socially responsible, big business efficiency and flexibility practices persistently rip up social stability. (How many neighbors “have time” to know each other?)

Sure, communities lived with the fear of poor hunting, crop losses – and war – for millennia, so what’s different? They were communities, not free lancers on their own for the next gig, constantly thrown in with a new band of strangers, and not with “feedback surveillance.” For example, I just completed an airline survey after a trip. Most questions were obvious checks on the details of airline personnel performance.

A Sinkhole for Human Creativity

Fisher claimed that pervasive monetization saps authentic human creativity. He thought that the last novel form of pop music was rap – straight out emotion from people in the “hood.” In a flash, promoters wanted to bottle and sell it; standardize and promote.

The misunderstood, starving artist is an old argument. Rock musicians in the 1960s disdained artists “selling out” real feeling. Money enticed them – or bribed them – and soon they were part of the system. Who cares whether it is authentic? If people will pay a million bucks for it, it’s art. Today thousands of aspirants put up videos on YouTube in hopes of gaining advertising bucks, and eventually big time recognition. How much of this is authentic creativity, and how much is crass attention mongering?

Mark Fisher’s depression resembles that of Kurt Cobain, the creator of Grunge music who took his own life 24 years ago. If you can stand his final interview, a disintegrating Cobain rails about his frustrated disgust with fame and commercialization.

Why read anything into economics as seen by socially disturbed artists? After all, many of us never identified with what Cobain represented, much less Fisher. Cobain just sang how he felt with minimal analysis or interpretation. Fisher tried to interpret. Suppose, just suppose, that the inner howls of a few are harbingers of mass emotion to come.

Then the message is that all our money, all our technical advances, and all our novel techniques do not confer much satisfaction or inner peace. We’re not robots. Not consumption receptacles, satiated with cheap stuff, deeply in debt, constantly switching sidings on career tracks to nowhere. As tools of the system, we’re not anything we would like to be. Any system must serve us. We can’t stand not being human.