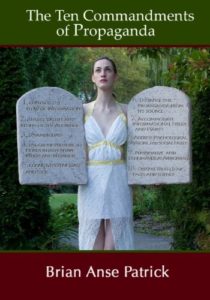 The Ten Commandments of Propaganda by Brian Anse Patrick

This review of Brian Patrick’s easy overview of a messy subject concludes with a twist at the end. Many books have been written about propaganda – or public relations today. Wily persuasion is part of many ancient stories, but the Catholic Church first used the term propaganda in 1622 in naming the “Congregation of Propaganda” (meaning to propagate the faith), an organization formed to counter breakaway Protestantism.

This Catholic institution still exists as the Congregation for Evangelization, renamed after the Allies’ propaganda bathed the phrase “Nazi propaganda” in moral stench. Synthetic persuasion having thus convoluted on itself, no P.R. professional today can admit creating propaganda. Public relations, or P.R., is a gray shaded euphemism for propaganda, which is still a black term to avoid.

Public relations is manipulating media for mass persuasion, and a learned skill. Person-to-person persuasion, usually called bullshit, is also an acquired skill. It may employ outright lying, but to be effective, a P.R. campaign must be believable. Blatant lies that contradict the obvious are laughable, like the reports of the hopelessly optimistic Iraqi reporter, Baghdad Bob, as American troops entered the center of the city.

The intent of propaganda is to influence people unawares. No one is immune to it; the Germans were highly literate. Brian Patrick refers to media as a “marketplace of competing propagandas,” selectively chewing up facts in P.R. meat grinders.

After elaborating on all ten rules, a world-weary Patrick tacks on an eleventh: Demonstrate good ethics (and don’t get caught).

Working under all kinds of ambiguous titles (or covers) P.R. professionals ethically posture in pliable roles: cheerful, sociable joiners and mixers, first interpreting the world to those at the top of an organization; then being paid to influence how the world interprets the organization. If a corporate or agency blunder becomes a public scandal, they may advise coming clean to scrape the tarnish off its brand – but is this contrition real or artificial? To be effective, P.R. professionals must believe their own propaganda; then move on to the next influential opportunity.

Often unaware that we are persuasively equivocating, the impulse to do it is a major impediment to resolving wicked, divisive problems. During the recent election, propaganda from all directions drowned out comparisons of issues. Some questioned whether the whole campaign was real or fake.

Social media exacerbated the divisions. You needed to follow very little of it to tire of trolls and flamethrowers using pseudonyms. Shelly Palmer, “one of Linked In’s top 10 voices in technology,” even proposes that this could threaten the human race.

Palmer refers to a 1956 sci-fi movie, Forbidden Planet. In the plot, the planet had a race called the Krell. 200,000 years earlier, they had suddenly gone extinct, doomed by technology with the potential to greatly increase intelligence. The protagonists nearly doomed themselves by finding this technology – then discovering its dark side – which unleashed “Monsters from the Id. In less Freudian terms, this technology created invisible, powerful manifestations of individual Krell’s most personal, unspoken, evil, and malicious thoughts. It was instantly lethal to the entire race.”

Can we advance beyond deceiving others and ourselves to become serious about real problems, especially “regenerating ourselves to promote regeneration” instead of endless economic expansion? Or, as that famous Pogo quote noted, “Have we met the enemy, and he is us?”