The Age of Surveillance Capitalism: The Fight for the Future at the New Frontier of Power, by Shoshana Zuboff 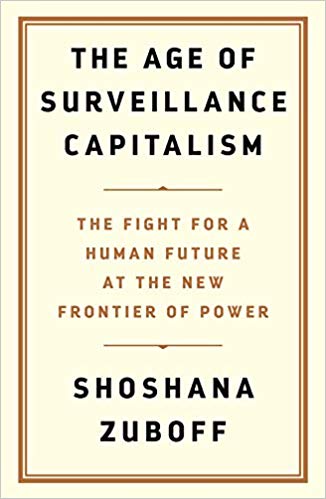 Shoshana Zuboff is Professor Emerita from Harvard Business School. Her research career began by studying the history of work, and she gradually focused on how the digital world was changing the work world. It’s a long book, but Surveillance Capitalism is the most comprehensive of a spate of recent books and articles addressing the problems of big internet companies and their business models. She might have intended it as a Wealth of Nations written for an internet age.

Zuboff is at her best explaining the creep of control over people. Advance slowly, so we are not aware. Stake out assumptions, say little, and wait for public outrage to fade away. Do it again. Google in particular declares something to be so and to be obvious, and it has gone in stages.

Zuboff refers to this sequence as the unequal “division of learning” in society. Continued over time, privatization of this division of learning amounts to an overthrow of the people’s sovereignty, or to individuals’ rights to think for themselves. She says that this is nothing less than a market form that assigns a price tag to subjugation. Your detailed data trail that describes you, without your knowledge, is property to be bought and sold. Zuboff refers to this as a market for “behavioral surplus.” She has more descriptors for data-driven enterprise than I can recall offhand. It’s like learning a new lexicon of buzzwords. The phrase I borrowed from her for the post is “Big Other.”

All this adds up to Google and other “Big Data” companies being our puppet masters behind the scenes. It’s what you don’t see that is important, and that has value.

Zuboff likens this digital power grab to the historical methods by which settlers moved into territory that previously had no private claims of ownership, so it was open for the taking. Plant the flag, survey it, declare defined real estate worth something, raise money, develop it, and flip. That’s how capitalism started.

The veil under which surveillance capitalists operate is complex contractual language. How many service contracts have you signed in a hurry just to get something going. Very few people read them, much less comtemplate the fine print. The profit making imperative of business induces Google and others not to back off their surveillance. Investors like nothing better than certainty of income, and assurance that it will keep growing.

Once a digital service can track you, you are open to targeted advertising. Many digital services need to know your location in order to provide them – to increase your personal convenience. If the tracker knows where you are and what you have recently been thinking, it can start making “suggestions,” and they may be helpful, but you are also being influenced.

It gets deeper. Intelligence agencies of all countries want access to Google’s data and analytical capabilities. Google’s employees have stirred internal unrest that leaked to the press about deals with China. Now, other companies are learning how Google and Facebook do it, and they are getting in the game. Surveillance technology is a Frankenstein that our desire for coolness and convenience has unleashed on society.