The Case Against Reality: Why Evolution Hid the Truth from Our Eyes, by Donald Hoffman 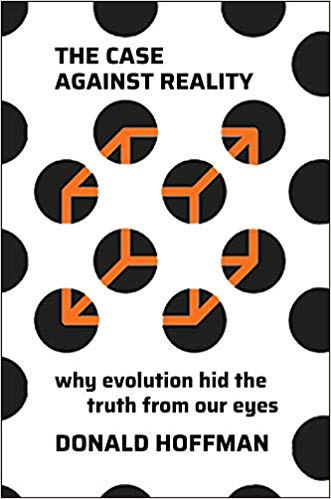 The philosophical and scientific quest to define consciousness is one of the foremost issues of our time. Don Hoffman is at the leading edge of this field of inquiry. A professor in the Department of Cognitive Sciences, University of California at Irvine, someone more diverse in interests is hard to find. He’s applied his thinking to advertising and to automotive lighting. To top it off, he’s an advisor to the Chopra Center for wellness and meditation (based on the Osho school of thought). This book sums up Hoffman’s case for reality not being “real.” He’s been developing it for 35 years or so.

So what has Hoffman concluded? Reality, if it exists at all, is utterly unlike our perception of it. The book stacks up sub-theories step-by-step toward this conclusion.

The first step is perception for evolutionary fitness before truth. Evolution wired us to detect whatever helps us stay alive. We see “icons” on which we can act, like “hide from the bear.” That idea builds on the Interface Theory of Perception. When watching images on a screen, we are aware that we are not seeing directly, but a layer of pixels that our brains interpret as a 3D world. Likewise, we may interpret images on a flat piece of paper first one way; then another, as 3D illusions, not as a drawing in 2D. Fooling the eye is essential to any sorcerer’s tricks.

It’s not obvious to the viewer, but the retinas of our eyes detect reflected radiation, not “reality.” We see an image of a bear, not a real bear.

From here Hoffman plunges into the deep end of the pool, the implications of quantum physics on our perception. Does a quantum, a particle, really exist if no one is looking? Or without something observing it? In quantum mechanics, any measurement of the state of a particle flips that state, and likewise it flips the state of a companion particle with which it is entangled. The flip is communicated between particles faster than the speed of light.

The physics world is filled with conjectures on why this might be. Hoffman posits a simple explanation: no particle exists unless it is being observed. The implications of this are profound. Everything we perceive, whether living or inert, is built up from particles being observed by something else. “There is no need to posit any physical object, or even spacetime itself, that exists when no one observes.” That is, reality as we think of it does not exist. If it does, it’s masses of particles seeing and being seen in the process of interacting with each other.

Therefore, what we think is objective reality does not exist. Instead, we experience an interactive data structure with a format for spacetime and objects, a universe of miniscule independent agents, error correcting codes modulating their interactions. Humans have evolved to interact with everything via compressed encodings of horrendous detail that our brains cannot comprehend. Our bandwidths are too limited to process it all. We don’t need to see all reality. We need only detect the severely compressed icons representing it and take action.

Tossing in a smidge of information theory, Hoffman proposes that it sets an upper bound to how much quantum information can be transmitted and received and still be accurate, protected by error correcting code. Ergo, omniscience by any being or system is impossible.

In the middle of this deep dive, Hoffman inserts a message on commercial con artistry. By knowing the rules by which humans perceive, conjurors have an edge manipulating the fleeting attention of consumers. If the conjuror’s objective is to arrest attention, make icons pop out, impossible to miss. If the objective is to divert attention, pop icons away from what you don’t want people to notice, which is what magicians do. Finally make buying easy; just click here.

We may think that we are serious believers in gathering evidence and rendering dispassionate, objective logic. However, the most rational thinkers among us are also fooled by the tricks of the conjuror. That’s why “smart” people also make dumb decisions.

Conscious realism is the hypothesis that the world (and the universe) is a network of interacting conscious agents. This is a hypothesis by the scientific definition. Evidence could falsify it. Hoffman is ready to see Conscious Realism refuted, but it’s a set of ideas to explore.

By the Conscious Realism hypothesis, a conscious agent has choices to make (or chances to take). This may be as simple as a one-bit agent electing which of two states to be in. Or an external influence can tip it into another state – the observer phenomenon. The simplest interaction is two one-bit conscious agents interacting – or entangling with one another.

From this simple base case, agents can combine and collect into many higher order systems of various complexities. They may form nearly inert rock or complex human beings. The behavior of bigger systems may follow statistical probabilities, but retain the possibility of unique behavior, like mutation.

According to the Conscious Realism hypothesis, two-bit agents can combine into four-bit agents, and on up the complexity trail until they approach the representations that we see in spacetime. These follow the behaviors we observe in macro systems. Hoffman speculates that conscious agents combining into small-world networks could explain the effects of gravity in a spacetime setting. This concept of things could explain some of the mysteries that fog us in when we try to understand things strictly as objects in spacetime.

Conscious Realism contends that human consciousness can never be fully explained as the result of synaptic fluxes in the brain, and that is Hoffman’s bailiwick in research. He contends that more is happening than can be controlled by altering our chemistry with drugs or subjecting brains to electrical impulses. That is, mind and matter do not have a one-for-one “linear” correspondence.

Hoffman insists that this insight is far from original. It’s hidden in the meditations of various religions, notably Buddhism. And he cites the non-celestial thinking of Galileo: “I think that tastes, odors, colors, and so on…reside in consciousness. Hence if the living creatures were removed, all these qualities would be wiped away and annihilated.” That is, many phenomena we sense are just features of our perception – sight, hearing, smell, taste.

Galileo, despite his tribulations, forced mankind to realize that we are not the center of our own universe. We are specks in a vast universe. Likewise, Conscious Realism has been crticized as placing human conscious back in the center of our own imagined universe. Hoffman says that it implies no such thing. Humans are but a few conscious agents in a universe full of them. Humankind can never hope to subdue and control the universe.

Hoffman is not the only person to propose that the universe is a big computer-like thing. Many physicists picture the universe as built up from Plank-scale (smallest possible) interactive computations. Physicists have developed theories based on this assumption. Many-worlds theory is one of them: the universe we see is but one of a near infinity of them. From the view of objective reality, this seems wacko. From Conscious Reality, it doesn’t.

Another offshoot is alternative reality theories.” If we’re all “seeing our own movie,” there is no point in science because we can never agree on anything. Hoffman does not buy this. Macro physics and chemistry as we perceive them have not changed. That side of science still holds. Conscious Realism does not eliminate evidence-based experimentation. How else can we learn? We should not go back to blurring the difference between spiritual (or dreamed) experience and rigorously observed experience. Conscious Realism merely let’s us concoct new explanations for what we perceive, whether by controlled experiment or otherwise.

Popular portrayals of a computational universe suggest that it is all a big “simulation.” Running with that idea, coding enthusiasts drool that by “hacking the code of the universe” we can bend its scenarios to our liking. But that presumes that we are the center of our own universe again. If the universe is a near-infinity of interacting independent agents, that does not suggest any great power to align them into scenarios we think we’d like. If anything, Conscious Realism reinforces that we are pipsqueaks on a vast stage.

What Hoffman does question is whether “cracking the neural code” of consciousness is possible. One avenue of that quest presumes that neural processes are dictated by electro-chemical mechanics. Despite initiatives like the Blue Brain Project for neural mapping, and brain signals controlling robots, Hoffman contends that mind-matter interfaces are more complex than that. That is, we are not likely to find a pill for every mental malady or discover brain-computer linkages that connect everything.

I read The Case Against Reality mostly for insights into the conundrum of human responses to overwhelming environmental threats. Climate change is big, but only one of a long list of other problems: endocrine disruption, oceanic pollution, resource limits, soil degradation, biodiversity and so on. These would exist were climate change not happening. Our first conundrum is that we can’t wrap our heads around all this. Our second conundrum is that if we somehow grasp this, we are enveloped in the habits of a behemoth economic system rushing to oblivion. Yes, pollinators may be disappearing, but we have to pay this month’s rent.

The message from The Case Against Reality did not help much. Most of us will be distracted from longer-term issues by the latest baubles that grab our attention. That’s how our fitness-seeking brains have evolved, and tricking them is endemic to the “Big Other” economy that we have constructed. Whether our upcoming Compression Thinking Series can rouse the logic, methods, and emotions by which we can escape Big Other’s conundrums is an adventure coming soon to these pages.