Much public discourse, if you can call it that, revolves around keeping economic expansion going, assuming that no alternative exists. Economists refer to the opposite of expansion as contraction, presuming that it’s a temporary blip in inevitable expansion. All their nostrums propose to revive expansion.

By contrast, “Compression” proposes living with less, presuming that we have put Planet Earth in a permanent squeeze. We can’t gorge on cake and save our environment too. Regardless of how little CO2 is emitted by methods to generate energy to keep expansion going, pouring more and more energy into earth is bad for ecology. Foolish use of energy has led to multiple threats. Therefore, we can’t fix just one threat, and expect expansion as usual to go on forever.

Drop-down menus and articles on this site explain Compression and Compression Thinking, but last week Jack Ring sent me an intriguing factoid that almost self-explains why we face Compression. An adult human needs only 2 KWH per day to stay alive, but keeping the United States economy going uses 220 KWH per person per day. Physically active adults might need 4 KWH per day. Therefore, keeping our energy dependent “economy” alive uses at least 50 times more energy per person than keeping us kicking. And we presume that this system must inevitably grow.

Some of us might enjoy living in balance with nature on 2-4 KWH day as hunter-gatherers. However, even intact natural ecology can’t support billions of people living in that way. We need to find a new balance with nature in which both nature and humans survive. But to do that, we need dramatically different thinking. Propagating Compression Thinking swims against the social current because the system’s institutions reinforce belief in economic development as a secular religion.

The Compression Institute is not the only entity concerned about endless expansion.  Three different perspectives about this appear in three recent “Doomsday Books.” The common thread is the difficulty of translating global threats into local action.

This Civilization is Finished: Conversations at the End of Empire and What Lies Beyond, by Rupert Read and Samuel Alexander 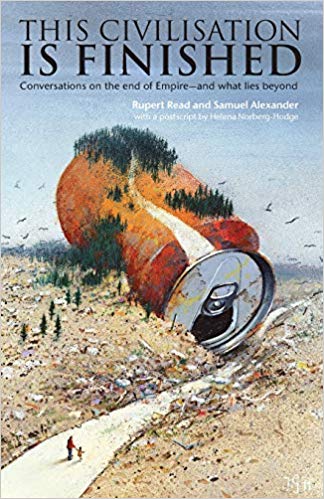 Relatively short, this book is a conversation between two environmentalists convinced that our existing economic and political order cannot stand much longer. We’ve been blind to the encroachment of the global economy into our ecology and our lives. De facto, big corporations and banks govern our lives. States and towns roll out the red carpet for any company promising jobs. This deference unravels the fabric of local cultures ceding local resources to sustain the grand illusion of endless growth. (This system brainwashes us too. Let’s call it “Big Other.”)

How to do this? Regenerate both soil and tight community bonds. Re-localize economies. Grow gardens. Form local co-ops. Promote “agri-wilding.” And so on. Let nature heal itself. This should heal our broken psychologies as well as our broken ecologies. But typical of Doomsday writing, the book is light on how-to and stays big picture. Big pictures cover a lot of diverse territory. If they delve into many specifics they become voluminous, but action requires focus, learning detailed specifics about local situations.

Before the Collapse, A Guide to the Other Side of Growth, by Ugo Bardi 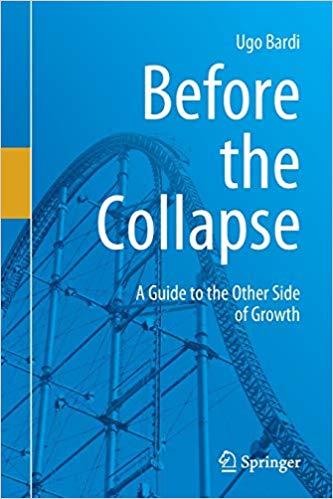 Bardi is Italian, a scientist, a member of the Club of Rome, a peak oil investigator, and lifelong model builder. He proposes models for how collapses occur, a science of collapse.

His theory is that collapses are inevitable because they are intrinsic to nature. From galaxies to microbial colonies, nature destroys the old to make way for new. No collapse is precisely predictable from its preceding mini-events, like tremors before an earthquake. We can try to preclude collapses. Failing that, try to mitigate them. Finally, in some cases we can exploit them for our own benefit. All these strategies are derived from biological collapses.

Collapse is at least cessation of growth of a phenomenon, and sometimes its total oblivion. Economic models assume that economic collapse is impossible if they don’t look outside the models. Like natural systems, economies collapse when destructive forces overpower counter forces intended to dampen them.

Collapses may be terminal, as when a patient cannot be revived. Or they may occur in cycles, as with overpopulation cycles of predators and prey. Naturalists favor a Lotke-Volterra model, which describes whole ecosystems collapsing and regrowing, like forests after forest fires.

No single cause explains the collapse of complex systems like ecologies. Little things weaken a system until it completely gives way. Bardi illustrates this with concrete bridges. A little crack here, another there, surfaces start to pockmark, moisture starts to rust the steel reinforcing. These effects gang up. Unless alert inspectors close the bridge, it will eventually collapse in a sudden burst, possibly taking some lives with it. In its climactic moment, a bridge collapse releases huge amounts of pent up energy.

Financial catastrophes like Enron are similar to natural ones. Little warnings precede a big bust — if people heed them. Like bridges, financial busts are fused by inattention mixed with overconfidence. Same with social collapses like the fall of the Soviet Union. It slowly rotted from within until at its climactic moment, people barfed up their whole way of life.

Enemies may murder civilizations, but most do themselves in, one little cut at a time. For example, historians never exhaust all the reasons why the Western Roman Empire wound down. Could the United States collapse like Rome — but faster? Of course. Pre-tremors are easily seen, but which one is the last before the big finale? For example, fracking is financially marginal. If its collapse took the petrodollar with it, the United States’ ability to financially sanction others would evaporate. if dominos kept falling, collapse would shake the energy-dependent base of global “civilization.”

“Psychological misrepresentation” (ideological bullshit) inflates social bubbles. It uses universal techniques: obfuscate, distract, and spin. Bardi builds toward the potential for that Mother of all Collapses, the end of economic growth, inflated by obsession to get the most from doing the least. Greedy investors aren’t the only ones obsessed. For example, North American natives hunting buffalo often stampeded a herd over a cliff, eating only one, leaving the rest to the buzzards. Wasteful? Yes. But they perturbed the entire planetary ecology very little. Now we command huge amounts of energy. Wasting it has huge impacts on earth that we don’t want to see.

This system cannot preserve our commons. Its collapse is inevitable because self-serving behavior baked into it pumps expectations sky high. Democracies can’t elect politicians wanting to end growth. That leaves autocracies and survival communities. Could Chinese autocrats persuade consumers to be content with much, much less?

Future civilization might resemble the Japanese Shogunate, 1603-1868, a benevolent dictatorship that lived within its resources as closed circular economies. No one could rise above the welfare of the whole, captured by “The nail which sticks up shall be hammered down,” the opposite of brassy American individualism.

Bardi envisions post-collapse societies being communal and local, but without losing all global telecommunication and transportation capabilities. That can only happen after collapse of the existing social order, but Bardi too does not know how to peacefully migrate toward a new order.

Why We Believe: Evolution and the Human Side of Being, by Augustin Fuentes 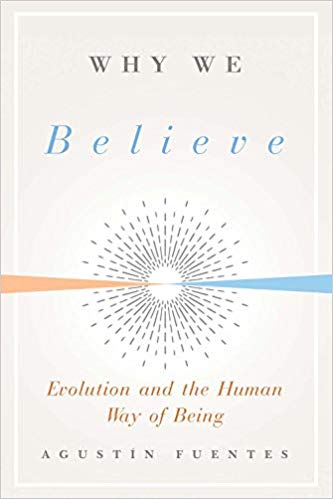 A professor of anthropology at Notre Dame, Fuentes’ chief interest is cultural belief systems. To attune readers to his logic, he carefully defines belief: “Ability to draw on experiences to think beyond the here and now, to hope, to dream, to infuse with meaning.”

Fuentes weaves beliefs into an Extended Evolutionary Hypothesis, based on a “biorelativity theory of evolution,” easier to understand if he called it co-evolution. We are influenced by inherited genes, epigenetic gene transfer from many symbionts, genetic drift, and more. We shape our environment. It shapes us. This co-evolution includes beliefs, not just observable biology.

Learning “how to be human” is an ongoing process of beliefs evolving with us. The evolution of beliefs is structured with evocative symbols, shaped using symbols from architecture to hand gestures. This is serious stuff. Seriously disrespecting other people’s sacred symbols and see how long you last.

Fuentes asserts that economic systems are more philosophical beliefs than social science. No matter how many complex mathematical models describe them, economic systems derive from collective operational beliefs. None are “natural laws,” not markets, not cost-benefit analyses, not rationing systems – none of it.

But living in a market economy also shapes our behavior and beliefs. If immersed in markets, we can believe that they are the one and only way to do anything. However, these beliefs are not deeply rooted in our evolutionary past. They are highly emotional, but not “instinctive.” They can be displaced, but with difficulty.

That noted, neoliberal economic beliefs have alienated us from nature — perhaps from “God.” Completely lost, we use money to “value” ecologies instead of comparing ecological reality with economic models. For many people, these self-interest models have calcified into to economic fundamentalism – one best way and no other way.

To evolve new economies, we should model nature. Ecology is not strictly dog-eat-dog. It’s a complex web of competition, collaboration, and symbiosis, and not always equitable or fair. But unless disrupted, co-evolution tends to balance and stabilize nature.

We can evolve new cultures with new beliefs  Our dominant economic beliefs today have led us to the edge of an ecological abyss. We “believed our way” to this state. We can believe our way back – but will we?

Acting on this presumes that we can imagine something better for all of us, not just some of us; that we can set aside differences and unify to overcome ecological perils. To do this, Fuentes proposes love in the broad sense – eros, agape, and phila – as defined by theology. Beyond material things, we desire bonds with other humans. But often, strong bonds form only with our in-group, and we distrust out-groups, or plain hate them. Fuentes does not directly address whether we are capable of forming strong affinity bonds well beyond the boundaries of tribes or “silos.”

Like most of us, Fuentes fumbles for specifics. He speaks of a greater capacity for “shared reality.” I don’t know what that means to him, but learning to sort out facts from fiction is a start – if we can even do that. In complex systems, our first quest is to find leverage points to influence change: dialogs, demonstration projects, propagating a new secular religion with new beliefs — or Compression Thinking, perhaps. Everyone is seeking that mysterious catalyst for change.