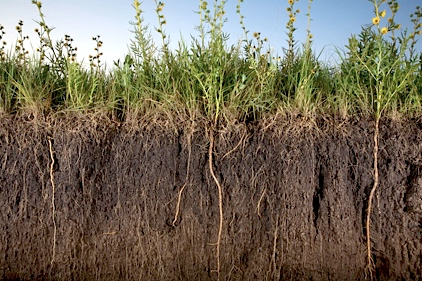 Bet you did not know that the United Nations designates December 5 as World Soil Day. The UN is trying to bring attention to an environmental threat that could be existential, but to little avail. Every day is proclaimed to be for something. When mentioned in lists of environmental threats, topsoil loss is usually tucked away under food shortages.

Topsoil is the hidden record of degradation of life on land. Topsoil illustrates very common systems thinking. Topsoil illustrates human issues of digging deep to learn how to do better using less. We have all kinds of problem solving techniques, but techniques do not resolve problems; people do. Developing ourselves to consider issues in great depth and breadth has as much to do with us and with our psychology as with techniques.

One human foible is feeling no urgency about seemingly remote issues. Americans have known that topsoil loss can be serious since the 1930’s dustbowl. Now for many, it’s only another abstract crisis affecting somebody else far away. Topsoil loss is global, but it is the sum of many local soil issues. Those we easily shrug off if consequences of our actions are far distant, out of sight. Most people agree that topsoil loss is bad, but is it a crisis? Making the rate of topsoil growth at least equal to its rate of loss seems a far-fetched goal. Unfortunately we must eventually reach that state – deliberately or by default – but do we have to start now?

Topsoil is a huge subject, touching everything. All land that is not rock has topsoil of some kind. Stuff that appears to grow out of rock lives in some wisp of topsoil. Forests have topsoil too, and cutting trees changes it. Unaware of a lot of topsoil functions, like water filtration, we wreck topsoil systems without regard to consequences; then seek high-energy technical solutions to perform the function.

Everyone can see topsoil erosion. The best countermeasures feature a tight root system to build topsoil in an ever changing, living system: a mix of roots, worms, grubs, rotting vegetation, trace elements, microbes, water migration – and “other.” Topsoil harbors the cycle of life. When it erodes, a lot of life dies with it. We seldom relate to soil closely enough to sense this aspect of a complex system. Beyond systems thinking techniques, we must extend systems thinking to become deep in time and broad in scope.

Topsoil degradation is soil “wearing out,” diminishing the life within. Vegetation declines because essential nutrients or conditions degrade. Devising countermeasures to restore vibrant life involves deeper cause and effect systems logic on a local level.

Topsoil production is less dramatic than rapid soil erosion. Topsoil is growing slowly all the time. Composting is familiar to many gardeners. Dig deeper and one can learn for a lifetime about soil – pH, nitrogen fixation, microbial action, micronutrients, for starters. Practical systems thinkers about topsoil don’t need a PhD in soil science, just interest.

Topsoil erosion and degradation are old, old problems, exacerbated by population expansion. From antiquity, some “indigenous” people preserved soil without the measurements used in soil science. They are systems thinkers in their own way.

Bet you never heard of “ethnopedology;” I just discovered it. It’s “a hybrid discipline nurtured by natural as well as social sciences, encompassing the soil and land knowledge systems of rural populations, from the most traditional to the modern.”

This mouthful means that soil scientists bridge cultural gaps to translate into a scientific framework what locals have learned, perhaps over centuries. Many locals express their lore in rites, songs, sayings, and stories. When successful, both scientists and locals discover new things because soil is unique to a locality, even spot-to-spot in your own yard. The locals may be ignorant of many things, but they sense interdependence with nature. Values are important; we learn about what we think is important, so to deeply learn about something different, you have to feel something different.

Perhaps that is why urban environmental clean up usually includes urban gardening. Besides helping to feed themselves, people bringing the farm closer to their table also learn to be closer to the dirt. The benefits of Urban farming appears to be underestimated. One benefit is exposing more issues of how cities dispose of their “trash.”

Finally, Vigorous Learning that uses Compression Thinking makes a big deal of identifying all stakeholders and garnering input about their needs. And one stakeholder can be – topsoil. “Stakeholder” is business lingo, and this sounds like a very cumbersome process for business, but we’re convinced that real people can do it.

Working such a process in any reasonable length of time requires a revolution in how we identify and resolve problems and issues, including complex, “wicked” ones where our own beliefs and behaviors are part of the issue. Techniques may help: variations of PDCA, rules for dialog, mind-mapping, and even gamification and paradoxical thinking scenarios. Indeed, we think that when well-applied, and starting simple, techniques could help.

However, the essence of real change is beyond learning to be more efficient doing what we do now. It is absorbing new values, learning to change what we do in order to be more effective in the long run, beyond the temptation of immediate profit motives. But to even engage in that, people have to open their minds a tad to accept that sharing facts and knowledge might budge their thinking.