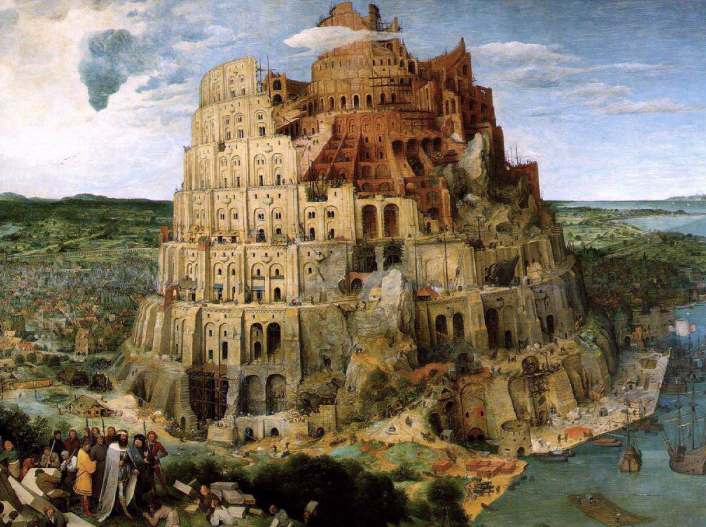 In the biblical story in Genesis 11, people speaking the same language wanted to build a great city with a tower reaching the heavens. Displeased by this ambition, God scrambled their language so that they could no longer understand each other, and the project died aborning.

Ever since, this story has alluded to the phenomenon of no two people understanding a proposal exactly the same way, even if they speak the same language. Blind men describing an elephant, and whispering a message around a circle are oldies used to describe this effect. All of us have experienced the Tower of Babel effect. It frustrates leaders daily. And it may yet be the downfall of advanced economies.

In the early 80s, I experienced a form of this effect with execs on industrial tours of lean plants in Japan. We all came with preconceived ideas. A few even intended to unravel what must be a PR charade. Preconceptions inhibited seeing what was in front of our eyes. Several days of cross checking with others finally began to reveal that we were seeing a different reality. Today we’d call this coming out of denial.

Most industrial tourists also focused on different subsets of a total manufacturing system; some on tooling; some on kanban systems; some on quality checks; and still others on HR – personnel and training. Trip reports varied, describing parts of a total factory system although visible, physical evidence presented many clues to it.

Very few tourists appreciated the importance of every employee having a grasp of the entire factory system. Little physical evidence pointed to that other than operators’ manuals having a diagram of the entire operational system as a centerfold. This violated the assumption that each operator need know only one little corner of the plant.

Fast forward to the business systems and environmental issues of today. Ecosystems are much bigger than factory systems. We may be oblivious to ecosystem problems that we can see, much less those far away and out of sight. Science journalists can only convey a patchwork of issues, not a big overview in context. For example, a comprehensive New York Times article warned of extinctions of life in the oceans, but readers harped that it omitted threats from plastic in ocean gyres to ultra violet light from ozone depletion.

The most publicized environmental threat is climate change, accompanied by much denial, of course. Climate change will likely exacerbate a host of issues that have been piped in these newsletters for some time: water shortages, topsoil degradation, loss of biodiversity, and so on. But if climate change turned out to be insignificant, many other impediments make it impossible to continue economic expansion as we know it.

All this is difficult to see if we cannot fathom quality of life independent of physical economic growth, unable to envision any alternative. As with lean, change requires learning a lot of new methods, but human change is necessary for the methods to be used to their potential. Human change is the most difficult. Learning to become systems thinkers, cutting through the Tower of Babel effect has never been so important.