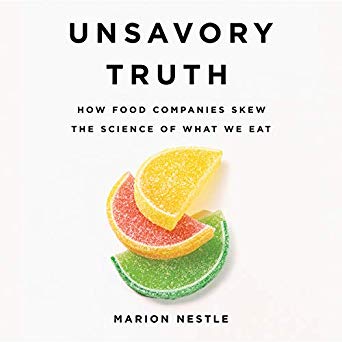 Except for political propaganda, hardly any field is more laden with misleading BS than nutrition. It comes from purveyors of food all wanting to sell their products. Those most influential are big food corporations. They can and do influence nutrition research.

Marion Nestlé (no relation to the company) is Professor Emerita of Nutrition, Food Studies, and Public Health, New York University. Unsavory Truth is the latest in a string of her books about corporate influence on nutrition research. Corporate thumbs on the research scales are becoming lighter, but they are still pressing, so beware.

The opening chapters cite cases and name names. One entire chapter is devoted to Coca Cola’s blatant foray into influencing research, labeled the Global Energy Balance Network, GEBN, orchestrated by a Coca Cola VP, Rhona Applebaum.  Her intent was to influence nutrition R&D both offensively and defensively, lest the company “be at the mercy of activists and crusading journalists.” That is, Applebaum regarded researchers as her enemy. To protect Coca Cola from them she strove to “prove” five objectives:

This campaign was amazingly effective until it collapsed in its own audacity. Nestlé found 369 articles in 169 journals between 2008 and 2016 supporting Coca Cola’s predetermined conclusions. Numerous researchers fell into Coca Cola’s trap. Most of them insisted that they were free of bias.

Nestlé pronounces this not to be research, but marketing. And it is effective. Many people do not distinguish between promotional propaganda and science that, while fallible, at least tries to be objective. For example, one reviewer of Unsavory Truth condemned Nestlé and nutrition researchers as “nanny state” dictators interfering with his free choice of food. Unknown is how much this critic’s culinary tastes might have been influenced by PR and advertising.

Most corporate influence on nutrition research is more subtle. If a company funding a study cannot influence the questions asked or how they are asked; then corporate PR attempts to spin whatever conclusions might be reached. How journalists report a study is crucial to public understanding, so issue a press release that only mentions favorable outcomes or that emphasizes favorable outcomes. Cushion any blows from unfavorable outcomes. Journalists pressed for time will not consult the original research paper so they don’t really know. Do them a favor. Offer them a grabby headline with little effort to work up.

Is there anything the public can do about this? Well, everyone can be wise and wary. Headlines touting a miracle breakthrough or an astounding contradiction of some prior finding reek of PR. Very little real research is that dramatic.

A wide variety of diets in different cultures are healthy. Everywhere the basic principles of nutritional research support much of the advice that most mothers gave their children three generations ago, before food advertising started messing with their minds. Eat:

Visit any grocery and you can see that few food companies heed “mothers’ advice.” They formulate food to a “bliss point” to make tasters prefer it to competitors’ offerings. They use preservatives and packaging for long shelf life and to endure lengthy haul distances. And usually, to be cheap.

As for how to remove the corporate bias from nutrition research, Nestlé notes the strengthening of academic and other institutional committees that hawk potential conflicts of interest. Researchers may not realize how subtly they are being conned. These checks are better than nothing, but they do not resolve the core problem: researchers are reluctant to publicize outcomes that might curtail future funding – and many outcomes are not funder-friendly.

In the end Nestlé flat says that only governmental or neutral party funding can free research from food company bias. She proposes an R&D “tax” on food companies that might work if it went into a fund that guaranteed no strings attached.

Then she says that she understands that big corporations are not charities. They exist to make money for ownership, and Wall Street presses them to do it. She does not address this Elephant in the Room – that corporate objectives have tended to undermine health objectives over and over again, with tobacco, with asbestos, with black lung, and lately perhaps with agricultural herbicides and pesticides. Trying to align commercial objectives with those of health and society – charity – is outside her bailiwick. But can we ever be confident in the nutrition of the food sold unless the objectives of food companies align with those of nutrition researchers?