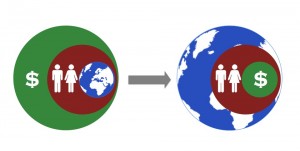 Having prevailed for centuries, the expectation of unending economic expansion is now buttressed by deep belief systems. Evidence that expansion has to end contradicts these beliefs, so any alternatives contradicting both beliefs and prior experience are hard to imagine. However, as previous updates have noted, continued expansion is blocked by multiple limitations of a finite world; if running one red light does not get us, others will.

Intellectually that’s understandable; however, emotion delays action because a world in Compression will undo much that we take for granted – including business and economic beliefs often held dearer than religions. Beliefs are embodied in “stories we tell ourselves.” Some morph into assumptions underlying economic models, business institutions, and financial conventions.

Abundant energy and material let us shrug off huge physical wastes symbolized by landfills. However, an even sneakier systemic waste is further off the radar. It is the evolving complexity of human-devised systems. Everyone snared in the daily rush experiences it: junk snail mail, e-mail deluges, smart phones pinging, traffic jams, incomprehensible billing statements, and volumes of data that only a computer can love. And promising to compound this is “IoT” the internet of things, coming on fast.

Physical growth in tons of consumption is measurable. Complexity waste is murkier, accumulating because it disguises what we are really doing from ourselves. A prime financial example is dissecting and resorting contracts into tradable derivative packages. Algorithms do most of the trading. Do many traders really understand what they are trading, or are they just living on the trading process itself? For that matter, how much GNP growth is just complexity bloat, doing the formerly simple by convoluted means?

However, even the basics of finance assume expansion. Formulas for compound interest and discounted cash flow are growth formulas. Financial measurements assume expansion, but we rarely think about that when using them.

Expectations of financial return sparked the system for colonial era expansion. It worked by “fractionating nature.” Survey land and divide it into parcels each owned by a developer. Call a parcel an asset. Estimate its future monetary return. Then by loans or otherwise, create money to let developers attempt to fulfill their dreams.

Asset owners helped each other and collaborated in communities, but financially, each owner was responsible for the success of a development. The system demanded that success be measured by selling into markets and buying needs from markets. The net gain had to pay for the land and it development. If one pioneer investment did not pay, move on to another.

Using this system and superior technology, expanding Westerners easily displaced indigenous tribes who lacked surveying, lived on tribal lands in common, traded only occasionally, and had limited concepts of personal property. On the other hand, indigenous people clearly recognized that money has no value in itself, but is merely a marker for trading. Consequently, indigenous “wealth” was the prestige of what someone did, rather than the monetary value of anything they had.

The historical concept of independent entities connected only by markets frames our concepts of business today. A company is an asset of ownership, a thing, except in legal standing. Its people are employees regarded as contractual assets, but not shown on balance sheets. Every operational company is expected to make a profit.

From this impersonal frame of mind, it is easy to think that if a company is making money, it is efficient, and if not, it is inefficient. If inefficient, then from this view process improvement is redeploying assets (including employees) to make a profit. At its most extreme, this belief holds that anything that makes money must be success.

By this thinking improvement increases revenue, decreases cost, or both. Revenue and cost are defined by a company’s financial transaction boundaries, so waste does not count unless the company pays for it. Examples are waste the company offloads to suppliers or to customers, or imposes on either taxpayers or the environment. That is the hidden waste of company fractionation.

However, fractionation promoted global expansion – or exploitation, depending on one’s perspective. Now this system is running out of feedstock from Planet Earth, plus splintering into more and more specialties and regulatory complexity trying to regulate itself. Fractured systems impede collaboration despite widespread emphasis on teamwork. Companies straining to make a profit from each bit of intellectual capital struggle to agree on industry standards. Inside companies (or other work organizations), allegiance to specialties creates a fog between specialists so they can’t see issues the same way.

Fractured systems create waste, like confusion communicating complex hand-offs. Eliminating this kind of waste entails more than reworking operations for better flow – or developing IT systems that let us “manage” the complexity. Instead, we must address organization structures, how we communicate, and how we educate ourselves over a lifetime – and yes, maybe even our deep beliefs guiding what is really important.

Visions of a better future come from beliefs – what we believe is important, what a company is, what it should do, and what we consider to be success. These may be logical, or we deceive ourselves that they are, but beliefs are more than logic. They are emotional motivators. Concepts of both success and waste are central to our beliefs, and to our clashes in beliefs. The definition of waste embodied in the lean movement has barely budged prevailing business concepts of waste.

Values and belief systems deeply buried within us rarely surface for reconsideration. However, if we can reconsider our beliefs, perhaps we can eliminate waste that keeps us from being effective as well as waste that impedes efficiency doing what we do now. To fare well in Compression, we have to work through these clashes.

Is it possible for an economy organized as transactional fragments to be individually efficient, but collectively ineffective? Do things very efficiently just to be doing? Win races to nowhere – or to our own oblivion?

In monetized industrial societies, financial systems and business beliefs have displaced “social compacts” that were less monetized in pre-industrial times. Retirement plans, health systems, educational systems, and infrastructure maintenance all depend on financial models that assume expansion. All are big, complex, fractured systems subject to unending dispute. All need “government” subsidy too. We only argue whether the subsidies should flow through government or through private market circumlocutions.

Indigenous tribes were the opposite of monetized industrial societies. Trading was limited. Education, housing, feeding, sick care, funerals, ceremonies – people did these things, they didn’t buy them. To live off the land, they honed skills to an acute level, but specialization of roles was limited. Indigenous tribes were self-reliant units living with nature, not conquering it, so nature regulated their population levels, which meant fairly steep age pyramids. Within the environment that they knew, they were holistic systems thinkers. Today few tribes live by their old ways, but exist at the fringes of encroaching industrial societies, dependent on their systems while honoring the memory of their fading traditions.

For emphasis, the table below simplifies contrasts, so descriptions are suggestive, but fuzzy. Very few humans are as singular of values as the table suggests, and everyone can add a few characteristics to the constellations of values. But if pushed, most of us can peg ourselves as dominantly in one of the categories.

The table omits much that is important. Conspicuously absent are factors related to personal and collective behavior. Do I look out for #1, or do I sacrifice for others? Am I introverted or extroverted? Biased for action, or biased for thought? Arty or analytical?

Despite the caveats, the table illustrates the deep values chasm that Compression Thinking must cross. Billions of people cannot live as indigenous tribes did, so we have to step up to basic changes unlike any tried before – and leave our old beliefs behind. To assure our common survival and quality of life, something very fundamental has to shift.

Posing this as a shift global in scale illustrates how monumental it is. What would it take for a world full of warring tribes to regard themselves as a human “tribe of the whole?” We can’t resolve this issue for the whole world, but what would it take to transform a company, a community, or a region in this way?

Shifting values is emotional; usually done by slow churn; rarely by sudden epiphany. However, no one shifts values unless they are willing to question their existing beliefs. Compression is not resolvable with better technologies and techniques while keeping the same business belief systems. Developing Compression Thinking is more than an intellectual exercise because core values influence everything that we do.