The Vanishing American Corporation: Navigating the Hazards of a New Economy by Gerald F. Davis 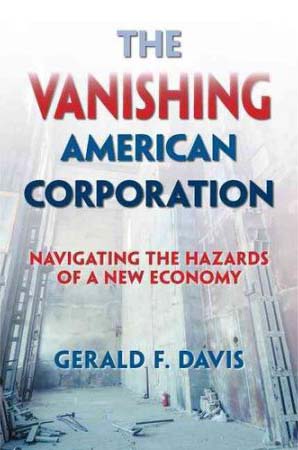 Gerry Davis is a professor of sociology in the Ross School of Business at the University of Michigan. He has long studied the effects of finance on society, and he carefully researched this book. He posits that business – and big corporations – are embedded in society, and help shape it. This readable history of business is global, but centers on the United States. Davis projects how business might transform our future, but only implies how environmental issues or resource shortages might affect us.

Davis’ main thesis is that the corporate form of business – mainly big business – is in decline. That partly explains the economic and political malaise of the United States today, an uncertainty not confined to the U.S. He nicely packages what one can glean from business news by backing it with historical data. Alternate forms of incorporation make it easy to start other kinds of businesses, and digital interaction is making it easy to coordinate activity that once required big bureaucratic organizations.

Big corporate structures gave the United States economic dominance and middle class security in the mid-20th century, but have been eroding since the 1970s. A peculiarity of the United States is that early in the 20th century, companies assumed both health care and pensions as attractive benefits to employees. Seemed like a great idea at the time, but no other country did it. Now it makes American companies non-competitive.

Davis cites nanny-state Denmark as an example of the paradox. The U.S. is supposedly the entrepreneurial center of the world. However, start-ups struggle in the U.S. while high-tax Denmark has become a haven for entrepreneurs. Companies are easy to start, and Denmark’s would-be entrepreneurs are not hobbled by debt.

In the U.S., health insurance and pension plans began as cheap employee benefits. Costs were absorbed to encourage young employees to stay for a career. But times changed and costs ballooned, and for some companies, drastically. When aging companies can’t shoulder these financial burdens, they unload them, breaking promises that they can’t keep. Many veteran employees feel betrayed, and few youth expect the perks and security of their elders. 1970 won’t come back.

The middle class is shrinking, but we don’t want to accept it. Prospects for a turnaround are slim. Software, internet, and artificial intelligence eat middle class jobs. Davis cites examples of digital disruption destroying many more jobs than it creates. Even Wal-Mart and Amazon are adapting their strategies to our 1%-99% reality.

In the post- middle class economy, a few youth strike it rich with a digital business plan that blows them into billionaire status while their cohorts struggle to leave their parents’ houses. Their jobs are 1099 part-time, on call with no bennies. Those that drift into task-bidding work, like Amazon’s Mechanical Turk, bid for the tasks they get. They may not even make minimum wage. Davis even sees that Wal-Mart could have part-time employees bid on times and wages for the privilege of a few hours work – market-based cost minimization at its finest.

Snoopy HR departments use digital tracking of keystrokes to know the most efficient and error free workers. Wal-Mart’s scans per hour is a well-known example. However, electronic communication also makes it easier for people to collaborate at a distance. Davis asks if an app could turn GM into a kibbutz.

So where is all this heading? After the usual caveats, Davis speculates that our future could be “cosmopolitan locavorism,” global communication with local economic structures, more socially integrated, and perhaps more enjoyable than digital monitoring hell. This is consistent with declines in nation states, the rise of cross border movements and other trends observable now. Example: The old imperial powers are failing to snuff out ISIS cells scattered in far-flung places.

Technically, what might stir a shift to cosmopolitan locavorism? Neighborhood maker centers for building or remanufacturing all kinds things that people might want, using 3D technology, for example. But what environmental and social forces will bring that cultural shift about?

Nothing Is True and Everything Is Possible: The Surreal Heart of the New Russia by Peter Pomerantsev 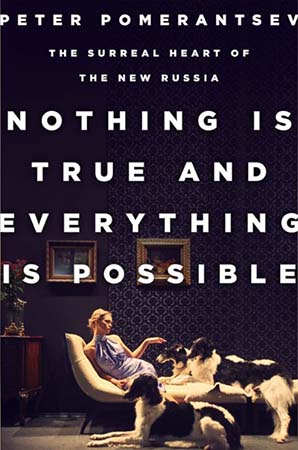 Pomerantsev is of Russian parentage, but  a British citizen raised in Britain, although able to pass as Russian inside Russia. He has worked in video media in both countries, nine years in Russia. Through media assignment he has met the glitterati of Russia: rich oligarchs, top bureaucrats, and fashion models, as well as down-and-outers whom the transition to capitalism did not favor. His personal tale and the stories he covered are well described by the book title.

In Russia, the media are induced to portray everything as favorable to Russia, lots of happy news, but with exceptions. Minor scandals imply a watchful media, while anything important is pre-determined. Putin runs a “managed democracy.” Any oligarch that runs afoul of officialdom can suddenly find himself railroaded into prison – or simply disappeared. The confounding puddles of fluff in official media and in social media suggest that “nothing is true and everything is possible.”

Many young oligarchs love parties and lavish displays – totally different from gray-slab communist virtues. Oligarchs often made their rubles by buying old Soviet enterprises for a song; then profiting handsomely when valuations shot toward the moon. If they are on the outs, a favored hidey-hole is London, or “Moscow East” — if they can escape with their money. Not wanting to talk openly about goings on in Russia, oligarch wives flaunt their wealth by turning to art. You or your rich hubby are unlike to become fatter targets by supporting artists or art salons, and it does impart a nice cultural flair.

To investigate the suicides of a couple of young Russian fashion models, Pomerantsev probed the ephemeral world of fashion modeling. Screening of prospects is strict; training tough; very few make it. Models must display just the right combination of attributes that attract fashion buyers, and that magnify on camera.

A chosen young girl from a remote village can vault to the runways of Milan, Paris, and New York in a couple of years. Not all cope well with this huge transformation of values and lifestyles. The money minded curry favor with rich oligarchs from Russia, or from anywhere. If they score, a sugar daddy showers them with goodies or weds them as a trophy wife – until this precarious game runs out. A Gold Digger Academy coaches girls on the arts of landing a sugar daddy, whether they are model material or not.

The suicides. Both girls entered a self-help cult called Rose of the World, which baited people having big dreams. It inculcated total passion for picking a dream and single-mindedly going for it. If you don’t reach your nirvana, it surely must be your fault, so failure is apt to throw people into depression, but suicidal depression? Who can be sure, but both top models mysteriously ended their lives, astounding friends and family.

Russia today is full of people confused about dreams, goals, and direction amid all the institutionalized corruption. They confront paradoxes daily. Cults and conspiracy theories abound. The same person may switch worldviews – and their dreams – three or more times a day. Media misinformation befuddles. During Soviet times the propaganda was at least consistent.

A good summary by Pomerantsev: Moscow can feel like an oligarchy in the morning, a monarchy by noon, a democracy in the afternoon, and strictly totalitarian at bedtime. The book suggests that we may all be whirling in a big paradigm churner, thoroughly confused. When it stops spinning, in what stable culture will we land?