Wealth, Virtual Wealth and Debt: The Solution of the Economic Paradox by Frederick Soddy (1933) 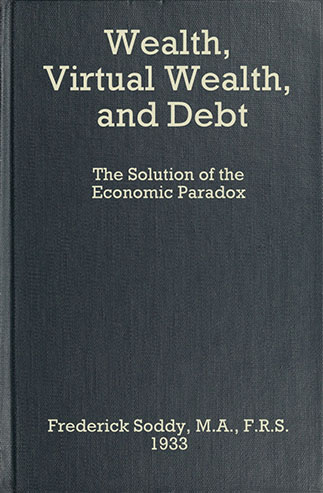 Frederick Soddy was a noted scientist of the early 20th century who won a Nobel Prize in 1921 for developing radioisotopes. By 1933, he was well aware, with Einstein and others, of the potential in nuclear energy. But after 1921, Soddy turned to the mysteries of economics. This work is his summing up, written in charming Victorian English.

Soddy has been panned because he identified with a popular 1920s global conspiracy theory that Jewish bankers were plotting to rule the world, but in writing he denounces all bankers for “virtual wealth” — excess interest and profits – predatory capitalism. The prejudice showing in the book is that non-Whites are never scientists. Set aside that bias of his time, and he offers cogent arguments.

Insights scattered throughout are still relevant today: The public is deluded by the “preposterous humbug” of the monetary system. That system should distribute wealth, not concentrate it. Real capital abstains from present consumption to produce something in the future; anything else is not real capital. An “iron law” rules a society faced with scarcity: in the absence of social justice, somebody loses.

The rich rig the money system to benefit them. To rectify this, Soddy proposed a “learned jury” of commoners to decide: modify, simplify, or scrap. This jury would have to cut through economists’ mystifying word spinning and equation fogging.

Any such jury would surely squelch the ability of private parties, like banks, to create and destroy money. Soddy discovered that many bank loans are simply loan accounts set up as assets to the bank, creating money out of thin air. Few people still realize this. Today it’s called fractional reserve lending. Public banks are a proposed solution. Why should we pay interest on thin air to private parties? Why not pay it to ourselves?

Public banks being in the future, Soddy excoriated private banks for creating money, asserting that only a “national mint” should issue money. Long before credit cards and the explosion of consumer credit, Soddy wanted financial institutions to boost the economy by issuing more consumer credit. Now we may have overdone consumer credit, but even in his time Soddy decried the system as a few gaining wealth by debt peonage of the poor – lifetimes of economic thralldom in hopeless debt.

Soddy was taken with the thought that capital spent in hopes of future gain should have limited life. After all, machines wear out. Income from an innovator’s wondrous thing should not be patent protected forever. Why should an idle class live on the exploits of their grandparents? Is that not akin to the rentier status of feudal lords? (The remnants of feudal society were within Soddy’s life experience.)

Unique among philosophical economists, Soddy realized that the formulas of market capitalism were unrealistic. Financial growth formulas can grow to infinity. The laws of matter and energy can’t, so finance creates the illusion of perpetual motion. Sooner or later the physics of nature must dispel this illusion. Then this system must give way to something more realistic, but it won’t be easy. “We cling to the illusions of class societies, and mad uprush into the possessing classes without recognizing that our existence is parasitic on nature.”

To get real, Soddy proposed an economy based on energy. All economic activity requires energy: human energy, animal energy, plant energy, and fuel energy; all originating from the thermonuclear energy of the sun, but he could not figure out how to base an effective monetary system on constants of energy. Below is his energy-fueled economy:

Of WWI, Soddy observed that while the battlefields were atrocious, Britain’s domestic economy boomed. When it was over, gushers of cash drained away. “We have returned to peace and squalor.” Nothing seems to motivate intense, focused economic activity like a war. Perhaps the only good that came from WWI was that the vestiges of the royal-feudal system were laid to rest in “the stricken fields of Flanders.”

Soddy had mixed feelings about atomic energy. He could envision it catalyzing the “potentialities of a civilization such as the world has not yet imagined possible.” On the other hand, he feared that we would apply atomic energy first to the arts of war, which he lived to see us do. Our problems are within us, not our technologies.

Throughout the book, Soddy poses enduring moral questions about any economic system. Does it presume that men live to work, or only work to live? How do we overcome the abuse that passes for argument? Of the present system, can anyone contemplate a coming millennium in which everyone lives off the interest of our own mutual indebtedness? A good question is whether “an enlarged reproduction” of any system would satisfy any soul.

Wealth, Virtual Wealth and Debt by Frederick Soddy can be downloaded in various formats from: http://www.fadedpage.com/showbook.php?pid=20140873

Evonomics and “economism” – belief that simple economic models can explain all and resolve all problems, that the government solution is always bad: http://evonomics.com/ideologues-economics-minimum-wage-kwak/

Alexa everywhere, in everything: https://www.wired.com/story/amazon-alexa-development-kit/