Winners Take All: The Elite Charade of Changing the World, by Anand Giriharadas 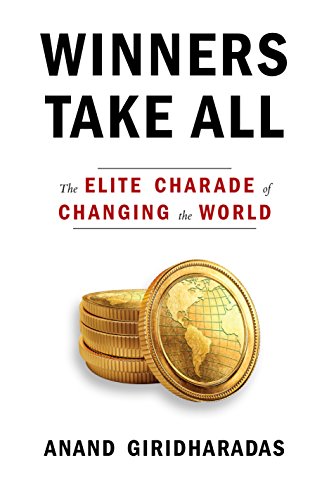 This new book is stirring a mini-storm in the world of non-profits, provoked by a guy who has inhabited the institutions he criticizes, Anand Giriharadas. He refers to business thinking as a pattern of logic of business he calls Marketworld. Today, non-profits, and perhaps the whole society, have fallen into the Marketworld trap, belief that if by its own criterion, money, business has been so successful, surely Marketworld logic can dispel the very issues that it keeps creating.

Giriharadas comes perilously close to saying that the economic status quo cannot resolve the unavoidable consequence of a free market system – global inequity. The roots of this problem are buried in the system itself, nurtured by elusive rationalizations using the stories that we tell ourselves. Writing to philanthropic, do-gooder executives, Giriharadas aims at this target without quite squeezing the trigger. A few reviewers ding him for trying to make an unpalatable message tasty to his readers, and to this extent, Giriharadas exemplifies the problem he tries to clarify.

However, Giriharadas deftly illustrates the mythical beliefs of Marketworld logic that keep its practitioners from seeing that they cannot save the world. All the way through he drops crumbs, but bakes them into a crust describing how McKinsey develops consultants to spit out “answers” to problems that they initially know nothing about:

What’s wrong with this? A lot, but a synopsis is that it emphasizes data and “doables” while neglecting effects on people: too much problem solving as outsiders see it; too little enablement of people to see and overcome their own problems. Plus, the analysis is biased toward doing projects, rather than dig into why the projects are thought necessary. It thus treats symptoms instead of root causes.

Giriharadas distinguishes between “thought leaders” and real social change catalysts. “Thought leader” is a term popular among consultants. A thought leader has a technique so superior that other thought leaders follow them. For a fee he or she can impart the details. The notion of just watching quietly, studying a situation to sense its contextual importance – well, that does not fit any business model. Being a genuine learner conflicts with being a “thought leader,” the smartest person in the room.

Entrepreneurship being the seedbed of fresh businesses, coach energetic youth to become social entrepreneurs doing well by doing good. Then they look for opportunities to seize rather than injustices to right. Giriharadas quotes an exuberant enthusiast, “Women’s equality is a $28 trillion opportunity.” Fixation on starting something new suppresses questioning of the economic status quo. Win-win ideas threaten no one with loss, assuming that an economic pie can always grow. Solutions are framed as feasible opportunities using existing skills and private interests.

“Even” is a Silicon Valley do-gooder example. It’s a software app to help precariats level highly variable incomes into stable spending budgets; only costs $200 per year. This Marketworld solution ignores why so many people become precariats, a systemic human issue. Instead it sees what it looks for, a market to be served.

Giriharadas picks on Silicon Valley solutions. Fixation on software limits the scope of any solution. Target any industry with unions for disruption; downplay any disruption to the welfare of its workers as mere collateral damage. For example, Uber regards drivers as solo entrepreneurs, not as quasi-employees whose discretion is limited by the Uber system. Enthusiasts frame Uber as an underdog fighting an old, inefficient taxi establishment. Driver livelihood, local tax bases, or traffic congestion are afterthoughts. That is, narrowly focused corporate success trumps broad social responsibility.

Biases to see problems as opportunities for existing skills is not limited to Silicon Valley. Marketworld attributes any change in civil culture to technology or process change – or to a new business model, assuming that more features, faster and cheaper are better. The dominant values favor materialist concepts of progress and success. Motivation to serve others is not high status – as with schoolteachers actually acting on such beliefs.

Giriharadas only mentions the idea that social justice requires universal participation. The elites cannot confer social justice on the poor. Low status people must learn how to participate, and be accepted as equals before fully entering into it. (Who listens to janitors?) Giriharadas does not elaborate on coaching people to participate, or how elites can build the necessary trust among lower status people.

Giriharadas acknowledges our severe environmental issues, but does not dwell on them. Being more immediate, social justice stirs more emotion. However, the same hubris that blinds the haves to the humanity of have-nots also blinds them to the serious consequences of ignoring ecological perils. Only with great difficulty can elites imagine giving up their status on earth. Imagining a colony on Mars is much easier.

Giriharadas wrote this to open the eyes of elite philanthropists, so he exposes their self-contradictions without hammering them. His dilemma is universal to ecological advocates because, not wanting to give up what we have, we interminably rationalize reconciling ecology with profligate consumption. A similar blindness affects all of us.