How to wake up from the frozen haze to recognize voiceless Earth suffocating at the hands of corruption. 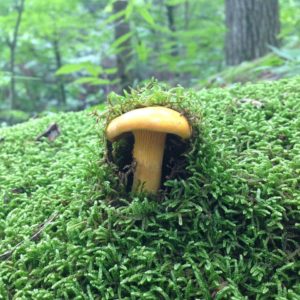 Australian environmental professor Glenn Albrecht coins new words, lots of them. His reason: Trapped in the language of today, we cannot imagine a new planet-friendly economic system, not as long as nearly every option is measured by money. Human societies shift thinking patterns very slowly while racing through the recently named Anthropocene Era too fast for earth speed. Earth speed is on a time scale that geologists use to peg geological changes, like tectonic creep of the continents.

Geologists now agree that we have been in the Anthropocene Era since perhaps the beginning of the industrial revolution – or whenever human impact on nature became a dominant effect on its evolution. (“Anthropo” is Greek for human.) Yogi Berra would just say that we’re screwing up the world, big time.

Before the Anthropocene, we lived in the Holocene Era. It began only about 11,000 years ago, when human artifacts like stone monuments first became noticeable. By geological time, the Holocene is a tiny blip. The Mesozoic Era (dinosaurs) ran on for 183 million years. The Anthropocene Era barely shows on a geologic scale, and a human lifetime is like nothing. However, the Anthropocene is all we have personally observed, so we easily deceive ourselves that it is “normal” – and that it might go on forever.

The Anthropocene Era is a disaster. (Climate change is taking on a new name, Anthropocene Climate Disruption, or ACD.) Nature can’t adapt fast enough to compensate for exponential growth in human development. Worse, we can’t change our collective thinking fast enough to adapt to it, like a flailing athlete too uncoordinated to keep up with her own speed. Therefore, with no fanfare on how to do it, Albrecht proposes conscious conversion of the Anthropocene to a “Symbiocene Era,” recognizing that our life is intertwined with all other life, so we must live in harmony with it. To do that, we need greater wisdom and self-control. That’s scary because we don’t have much of it.

Albrecht has blogged the Symbiocene Era since 2011. He holds that the geologic future of earth – and the biosphere sitting on it – depends on humans adopting a different worldview. We have a lot to learn – and to unlearn – because escaping the traps of Anthropocene Era thinking is a gut-level transformation. The system holds us in its orbit because we live in it daily. Our hopes, our dreams, our communications are expressed in commercially laden language. We need a new consciousness. Whether we name it “deep ecology,” New Age Poop, or the Era of Deep Learning, it has to touch us more deeply than deploying new technology or techniques.

Commercial language evokes images of the present. No words evoke an unknown future. For instance, despite inspiring many green projects, ‘sustainability’ implies sustaining the present system, not nature-first thinking. ‘Resilience’ too often implies restoring the current system from a temporary disaster. Symbiocene thinking – actually putting nature first – is so radically different that Albrecht coins new terms for it. Many are on one of Albrecht’s posts. Most of them expose the flaws of Anthopocene thinking.  Imagining the unknown starts with a blank page filled with invisible words and images. (Yogi: We’re completely lost, but we’re making great time.)

Where Albrecht lives, in Australia, actual black swans also live, but they don’t thrive; they struggle in a degrading environment. As a naturalist, this distresses Albrecht, but his whole landscape is likewise degrading. This “total distress” led to him to coin his best-known word, solistalgia. By it, he means the loss of solace and assurance when ones surrounding natural environment is chronically degraded. (As Yogi would put it, he gets homesick without going anywhere.)

Soon Albrecht discovered that others misunderstood solistalgia, using the term to advocate racism, sexism, and other prejudices, so he tried to rescue it. He changed solistalgia to solialgia! Since language evolves in use, the half-life of a buzzword is not what it used to be, so coiners’ intentions float away in a ball of fuzz.

Another Albrecht word is corrumpalism. He defines it as, “the ability to corrupt and destroy the integrity of a social system and its biophysical foundation by perverting all forms of development via the use of misinformation, falsehoods, money and/or violence to achieve self-interested outcomes that are the opposite of cultural and ecological interests.” (Yogi: Would be an obscene bumper sticker if people understood it.)

Unpack this. Belief in endless growth rigs “the system,” beginning with the illusion that that economic growth is progress. Since to get anything done, we daily use the financial system based on it, this system shapes our thought. In economically advanced societies, corrumpalist subterfuges abound that prop up this illusion (blow smoke in Yogi speak). One Is abuse of eminent domain, abetted by booster puffery.

An egregious example of eminent domain abuse is the case of Kelo vs. New London. Susette Kelo was a property owner in the Ft. Trumbull neighborhood of New London, CT. Her property was condemned to build a model neighborhood to complement a new Pfizer facility. As justification for public use, the city argued that a more upscale neighborhood would boost the city’s economy, jobs, and tax revenues. Kelo and others fought the case to the U.S. Supreme Court. It ruled against them in 2005.

In 2009, its tax breaks having expired, Pfizer closed the facility and pulled out 1400 jobs. The Ft. Trumbull neighborhood is now a vacant lot.

In her 2005 dissent to Kelo vs. New London, Justice Sandra Day O’Connor foresaw such outcomes. Riled, people of all political stripes implored Congress to take action. It hasn’t, but many states amended eminent domain statutes. However, the smoke of corrumpalism curls up from many of these changes. The legal procedures remain a gauntlet, costly in time and money to owners subject to condemnation. If you don’t defend your property, you lose it. Out-lawyered and out-spent, most defendants still lose.

In a court of law the environment itself has no standing. A human has to speak for it. An eminent domain case involving environmental damage isn’t argued on earth’s behalf. It is argued as a collision of different humans’ property rights and values.

Eminent domain is a latter day version of a cornerstone of colonial capitalism – seizure of un-surveyed, undocumented land. Few colonized people could prove ownership of ground that they might have occupied for centuries, so the legal logic was that if nobody owned it, land was free for the taking. In many parts of the world, this is still done. More developed societies must thicken the legal smoke to carry out much the same thing.

In a campaign involving eminent domain, control of the public story complements legal hassling. Frozen topics are not discussed. Frozen questions are never asked, in time freeze-drying the deep beliefs by which all stories are interpreted.

Development projects, with or without eminent domain, usually have public relations campaigns. Exude great confidence. Talk up the new jobs and new money; poo-poo anything that will be destroyed. Support local schools and charities. Befriend anyone of influence that can befriend the project. Be open to friendly media; freeze out any asking nosey questions. Assure that precautions are more than adequate. If objections can’t be ignored; drown them in positive spin, or consign them to the ice chest of frozen paradigms. (Proclaim that objectors are against progress; end of discussion.)

Once belief that economic growth is progress is freeze dried into a hard core, many questions aren’t asked: What is money? Why is money an ultimate deciding factor?

In this frozen haze, large established businesses quietly pushes to guarantee their income. For example, the American Banking Association recently filed a comment with the Federal Reserve. Congress cut the dividend on stock that they are mandated to hold to be a member of the Federal Reserve from 6%. That rate had been unchanged since 1913. The bankers argue that this is uncompensated seizure of private property, unconstitutional under the Fifth Amendment. Observers surmise that that the bankers are merely “seeking administrative relief,” a requirement before taking a case to the Supreme Court, arguing that the government has no right to reduce their revenue (or billions in subsidies, depending on how you think of it).

Blind faith in economic growth infects media too, and media infect us. Media companies are businesses needing a market; they want it to grow. If it shrinks, they have a financial squeeze. Since advertising revenue depends on market size, market logic influences what is covered.

Concern that concentrated ownership of media biases news coverage is decades old. The issues are well hashed in Wikipedia. Now this concern is extending to big software and social media companies, like Google, Facebook, Apple, and Amazon; services tapped by anyone on line. You have probably noticed that they are competing to hook you on their service and keep you hooked. Their features increasingly include “news.” Are they concentrating web resources? If one captures you in its web, does it influence how you think and communicate? Or as Yogi might say, “You got them right where they want you.”

For example, Facebook executives are alleged to influence the slant of news posted, or whether to deny a web page for some presidential candidates. In a quest for money, all the large search engines plant the pages of paying clients at the top of the results for most searches. And critics charge that all commercial media turn serious news into entertainment. Many people prefer their news in a comedy format, preferring real humor over pretenses of seriousness.

The power of corrumpalism in digital media is evidenced by a survey of teens. Half think that they are addicted to their phones. A quarter of them think that their parents are. In many households phone addiction is a nagging concern. As surely as trains and automobiles earlier, digital saturation is changing society.

But Albrecht has invented a few positive terms, like “soliphilia,’ the opposite of solastalgia. Soliphilia means “the love of and responsibility for a place, bioregion, planet and the unity of interrelated interests within it.” Few of us being Greek scholars, we can’t remember these words – or spell them.

How would Yogi Berra say almost the same thing?

Solastalgia: Nothing looks natural anymore; people tear up anything natural.

Corrumpalism: The biggies roll it all downhill, where I am.

If Yogi Berra could figure this out, maybe the rest of us can. Yogi never elaborates, but we sense what he means.